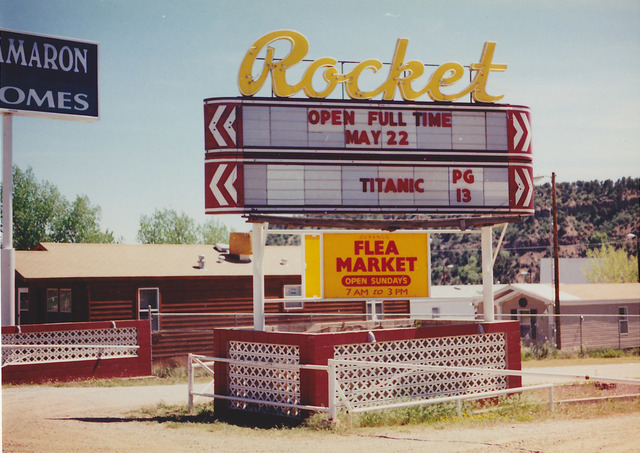 The Rocket Drive-In opened on March 10, 1957 with Audie Murphy in “To Hell and Back” & John Ireland in “Gun Slinger”. This drive-in closed in October 2004, and was partially demolished to be replaced by new condominium development. In 2019 apartments were built on the site.

Drive-ins.com states the Rocket has been razed. Some additional photos are here:
http://tinyurl.com/24z47bz

The aerial view from Google Maps shows the Rocket’s footprint mostly untouched in 2017. Even the projector / concession building is still there.

Google Street View from 2012 shows the base of the marquee still there along with a “10 acre for sale” sign. Makes you wonder if they’d have been better off keeping the drive-in alive.

The Durango Herald ran an article on August 30, 2003 to salute what could be the final weekend for the Rocket. “The Scales brothers, Leonard and Jack, built the drive-in located on U.S. Highway 550/160, just south of Wal-Mart, in 1956. One year later, the drive-in opened and has remained with the family.”

Leonard’s daughter Melanie Scales, the Rocket’s manager, said the 2003 season had been one of its most successful, but the drive-in was still for sale with no buyers.

In the May 2018 issue of History La Plata, Charles DiFerdinando wrote, “On March 10, 1957, the Durango Herald-News announced the opening of Durango’s newest drive-in theatre, the Rocket Drive In, 3 miles south of Durango. It opened with a double feature: "To Hell and Back” starring Audie Murphy, and “Gun Slinger”. Managed by Jack Scales, the Rocket could accommodate 450 cars."

In 2010, the Rocket’s old sign was restored and placed in the Rocket Grille inside of the Fort Lewis College Student Union.

And they finally built something on the old Rocket site. The Rocket Pointe Apartments opened there in early 2019.