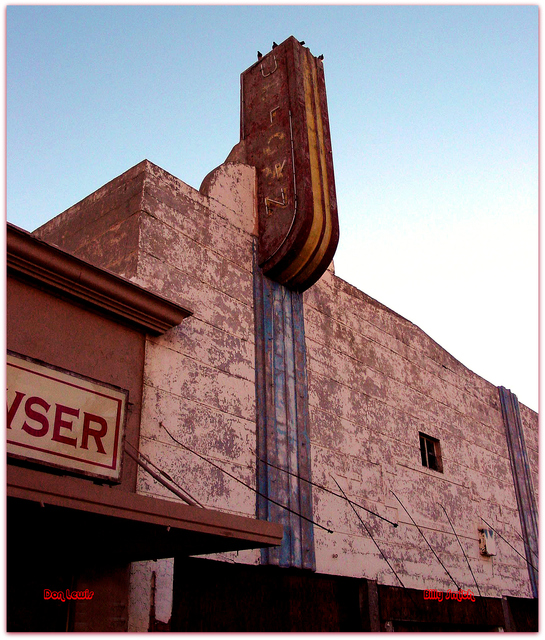 The Uptown Theater was located in an old section of town that a busy highway has by-passed. It was accross the street from the now closed Magma Hotel which was built in the 1800’s.

The Uptown Theater had a tall vertical sign with the name almost faded away and a few pieces of broken neon holding on. The town sits at the base of some beautiful towering red cliffs.

The Uptown Theater was demolished in 2009.

In the movie “U Turn” starring Jennifer Lopez, it was filmed in the downtown area of Superior, with excellent exterior shots of the uptown. It still looks like a theatre, rather tattered. Don’t know if it is still there.

The father of a friend of mine lived for a time in Superior when he was growing up, and attended the Uptown. Several years ago, he revisited the town and photographed the exterior of the Uptown for me. The style is Streamline Moderne. The theatre appears closed and faded, like in the above description.

I grew up in Superior in the 50’s and 60’s and spent many hours at the Uptown. The features were cycled as follows: a double feature from Thursday through Saturday (including a matinee on Saturday); and another double feature Sunday through Tuesday. On Wednesaday they would show a filmi in Spanish, usually a comedy with Cantinflas.
Prices back then: 35 cents for kids, 50 cents for adults.
Kids were usually banned from the balcony (due to popcorn pitching). They had a couple of ushers with flashlights that would chastise the roudy and who also ejected those whos were acting in an antisocial manner (i. e. usually noisy).

My photograph of the UPTOWN View link

Here’s a 2005 view of the UPTOWN: http://www.rushcreekgallery.com/lfop/index.html

The Uptown is actually just a shell. The auditorium roof caved in some time ago. The back wall of the theatre has been rebuilt but still no roof.

The Uptown has been demolished.