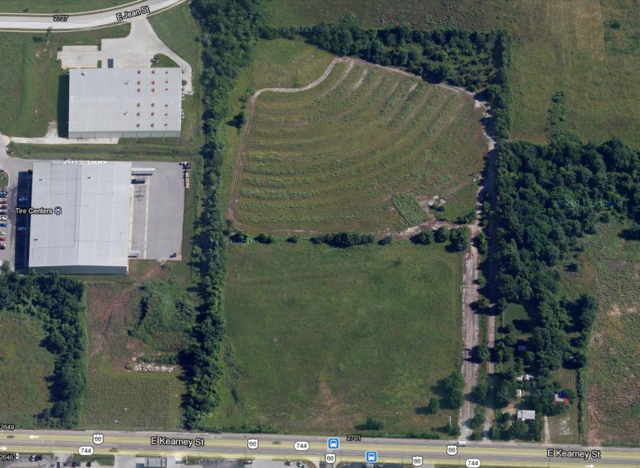 The problem is that there’s no convincing evidence that there was a Holiday Drive-In at Springfield in the 1950s. Nobody claims to have seen it, or even to have seen ads for it. Everybody is repeating second-hand reports of its existence.

The reports in Boxoffice all point to new construction on a virgin site in 1969 for the Holiday, and the complete absence of any mention of the Holiday in earlier issues of the magazine, when three other drive-ins in town were all mentioned more than once, also makes me skeptical of its existence. Somebody will have to dig up an ad or a directory listing from before 1969, or an eyewitness who actually saw the place before 1969, to convince me that there was an earlier Holiday Drive-In in Springfield.

RE:Commonwealth had begun the construction of a screen tower and other work for a fourth drive-in at Springfield, an 800-car situation to be located on the south side of Sunshine (misspelled Shushine in the item) between Ingram Mill and Blackman roads. This project was apparently not completed.

It was completed and it was called “Queen City” Drive-in. It was a two screen drive-in. Not sure when it closed, but there is a Sam’s Wholesale Club on the site now.

Apparently there was some delay in the construction of the Queen City, as it didn’t open until some time in 1970. I don’t have an opening date for it, but I got the impression from the August 30, 1969, Boxoffice item that the Holiday opened first. The magazine might have just overlooked the opening of the Queen City, though. Not every opening in every city was covered.

This should actually be listed as 2744 E. Kearney St, Springfield, MO. The coordinates for the remains of the theater are at +37.23926, -93.23691. The sign still exists and says Holiday Theater quite clearly.

Additional history on the Holiday Drive-In.

Opened with a colour cartoon(not named), “The silent screamer” and “Paint your wagon”.

Looks like if the adjacent land was purchased, this could be an excellent twin screen drive-in theater.

Since it’s such a great history article, and since newspaper links tend to turn obsolete after a few years, I added the page that David Zornig posted (thanks!) to the Internet Archive.

According to the Answer Man, a May 18, 1969, story in the Springfield Leader and Press said the Holiday “would have two screens, one for 490 cars and the other for 509. That didn’t happen. It ended up with one screen for 529 cars.”

I managed the Holiday Drive In in 1974. From what I understand, It was originally going to be built where Northtown Mall is today and was to be the first Twin Drive In in Springfield. I did some yardwork there prior to it’s opening and the same at the Queen City prior to it’s opening. I was drafted in the Army and was not in Springfield for the Holiday’s Grand Opening. The first Manager was Gary Prosser. Projectionist was Jim Wilson.