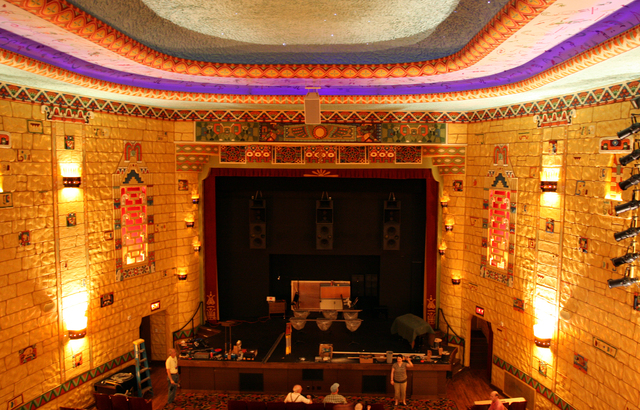 Built as the Bijou Theatre in 1908, this former vaudeville palace was remodeled in 1916 and was operated by the W.S. Butterfield Theaters chain. added movies to its programming and by 1921 it had been renamed the Orpheum Theatre.

The theatre was later saved by the Friends of the State and is currently owned by the Bay City Downtown Development Authority.

The theatre’s new owners embarked on a massive renovation, with over $2 million in funds raised for the project, it was completed by early-2006.

Re: the new marquee…………
Really would have loved to see a closer replica more true to the old “Bay” marquee, than this flashy digital animated thing. Yes, I’m a purist, but I really think this missed the mark.

Here are some photos of the marquee coming down from the Bay City Times in August 2008:
http://tinyurl.com/9zj3r4

Sorry, but I think the original marquee was much nicer and historically significant. the new one is flashy but too plastic.

New Marquee is nice, but I like the old one better,but no one asked me.

Built in 1908 during the booming lumbering era in Michigan, the STATE Theatre was known as the BIJOU and was redone in 1930 by C. Howard Crane, who used local labor using hand-crafted plaster casts for the 9,500 square-foot theatre. As years passed and owners changed, the Mayan murals were painted over and water damage became evident. The Dow Chemical Company Foundation provided financial support for the restoration project.

1908 post card as Bijou Theatre added courtesy Walter Jung. It shows how drastic the exterior remodeling was compared to the photos of it as State Theatre.

The June 24, 1916 issue of Moving Picture World said that W. S. Butterfield had recently been in Bay City making arrangements for the remodeling and redecoration of the Bijou Theatre. Plans included a new ventilation and cooling system and two new Simplex projection machines.

The Bijou was originally built for owner-operator J. D. Pilmore, with a notice that construction contracts had been let appearing in the July, 1908 issue of The Bricklayer and Mason. Pilmore had operated an earlier Bay City house also called the Bijou, at least as early as 1905. The earlier Bijou was listed in the 1907 edition of Polk’s Michigan Gazetteer as being at the northwest corner of Center and Madison.