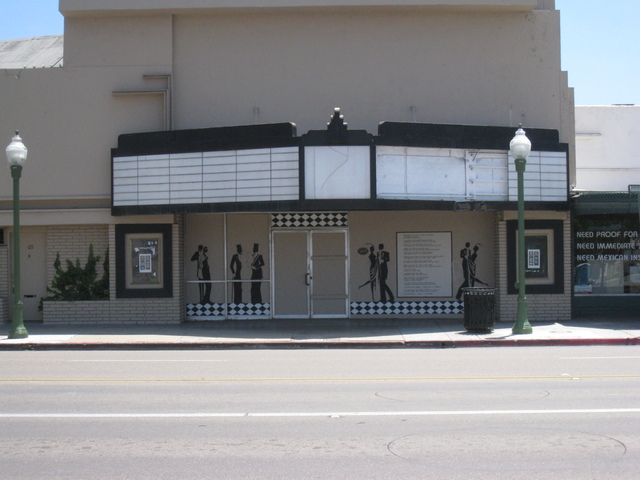 The Ritz Theater opened on September 9, 1937 with Robert Taylor in “Broadway Melody of 1938”. It was operated by Mr. and Mrs. John Johnson. It is 8,400 square feet. It showed three different double-features a night. Wednesday nights were 10 cents and had a keno game at intermission. It was highly successful until 1951 when a fire gutted the interior. It reopened in 1954, but because of television, it did not do as well.

New owners Chuck and Leona Borough purchased the theater later in the summer, but as of yet, have not decided what to do with the building.

The theater is relatively intact. It needs to be restored to it’s 1954 appearance. The look of 1938 seems to be gone forever. It would make a marvelous venue for classic films because of Escondido’s active retirement age population. Grand Avenue is beautiful tree-lined street that thrives on it’s antique shops and coffee houses. There are two live theater venues within blocks of this theater. There also is a Friday night classic automobile “cruise-in” every Friday night that is well attended.

Owned by the New Vintage Church since March 2019, by November 2019 a major renovation was under way to convert it back into a cinema and multi-use performing arts complex. It will reopen as the Grand Theatre.

An article in today’s North County Times says that the Boroughs have spent $70,000 in repairs so far on the building in the 3 years they have owned it. Repairs were halted this past year while they did work on their 112 year old house, but they plan to resume renovation in a month. Their hopes are to make it a community owned theater.

Advertised at 309 E. Grand in September 1979. Name was the Bijou. Feature films were “Wanda Nevada” and “Invasion of the Body Snatchers”.

I’m reasonably certain that this is the theater building:
http://tinyurl.com/yb8rus5

A plan has been submitted to the Escondido City Council that would turn the Ritz into a cabaret dinner theater and events venue: View link

I believe the building in that Google link two posts above is an old drugstore. The theater appears to be to the right of that, one building in from the corner of Juniper Street.

Here’s a cool newspaper clipping showing all the movies playing in the general area back in 1975.

From this site: Valley Drive-In Blogspot

In the below 2010 YouTube link, Lorraine Boyce the first woman mayor of Escondido recalls her part in the closure of the Pussycat Theatre.