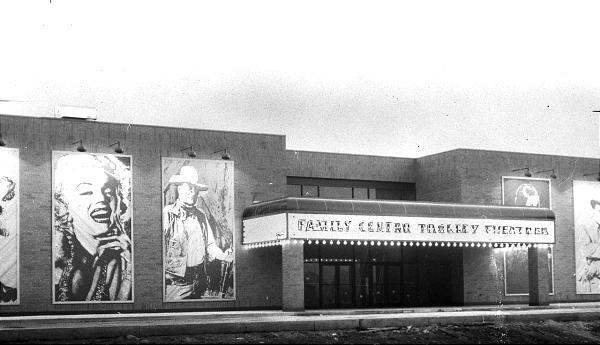 The Family Center Trolley Theatres had a grand opening on December 21, 1976, showing the premiere of “Joe Panter” a film made by Utahns. The following day it opened with Jodie Foster in “Bugsy Malone”.

The design of the Family Center was similar to that of the Trolley Square Theatres with nostalgia in decorations, with old time projectors and graphics of celebrities of stars of yesteryear.

The theatre was a million dollar project of Trolley Theatres with two auditoriums seating 400 and two seating 300. The first regular attractions at the new Family Center were “Shout At The Devil”, “Baker’s Hawk” and “Murder by Death”.

When Loews took over operation in 1990 they changed from first run attractions to a dollar theatre. Loews closed the theatre in September of 1997 and it was demolished to make way for a new Babies R Us store.

I worked at this theater in the early 1980s. I started as an usher making $2.85/hour and left an assistant manager. This was a wonderful place to work, but the theatre was (IMHO) mistreated by its later owners. As a trolley theatre it was marvelous and looked fabulous. Ushers wore trolley car conductor uniforms and the concession girls keystone cop outfits. We were still using old fashioned key registers to print out movie tickets. Later we were bought by Plitt. The uniforms changed to less impressive (and very warm to wear) red jackets and dresses. Plitt cared about us about as much as their left armpit. Finally the theater was bought by Odeon Cineplex —– who cared about us least of all. What was once a magical place became just another place to see a movie. I miss the many people I worked with there and wonder what has become of them: Mike Black, Hope Topalian, the ever ecclectic Lisa Daricotte. I have fond memories for this theater, and was saddened to hear it had been demolished.

me too Keith,I worked there in the mid 70s to the 80s and it was a great place—maybe I worked with you? Mike was the last Mgr I remember. I was sad to see it go.

I lived in Sandy, and this theater was very close to my home. My wife and I and 3 kids went to this theater many times as they grew up..there was a premiere of Footloose when it opened in 1984 and I think they showed it in all the theaters for a day or two. I was very sad when they closed it after it had been dollar theater.