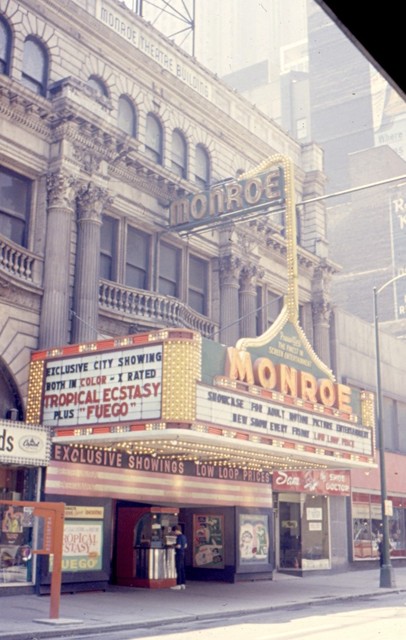 When Barbee tried to have a stage built in the theatre, the city prevented it, because of the lack of enough emergency exits.

On September 1, 1923, the theatre was reopened by William Fox as the Monroe Theatre. In the 1930’s or 1940’s, the entrance and interior to the building was given an Art Deco style makeover.

By the 1950’s, it was showing B-grade sci-fi and horror films. In the early-1960’s, the theatre started to add adult films to its mix of programming.

Yes,Bryan.thanks for taking the Time.

Here is an item about this theater from the March 8, 1919, issue of Chicago’s regional business magazine, The Economist:

“Architects Postle & Fischer, 140 South Dearborn street, have completed plans and are receiving bids on the general work for remodeling the former three-story Inter Ocean building, 69x190, Nos. 55 to 59 West Monroe street, into a thoroughly modern motion-picture theater for Harry C. Moir and Wm. S. Barbee. The entire rear portion will be wrecked, and the building reconstructed up from grade, with brick walls and reinforced concrete floor and roof. It will have a seating capacity of 1,000 persons, all on one floor. The design of the interior will be an adaptation of the Spanish renaissance style. The lobby, foyer and spectatorium will be finished in tile, twenty feet high, surmounted by ornamental plaster cornice and ceiling. Special attention has been paid to the color scheme and light effect, which will be unique. An air washing ventilation system and a costly pipe organ will be installed. The improvements are estimated to cost $115,000 to $125,000.”

The name Fischer is currently misspelled in the architect field.

John B. Fischer was for a time the chief designer of the Chicago office of Shepley, Rutan & Coolidge, the Boston firm that succeeded the practice of Henry Hobson Richardson. Fisher continued to practice architecture in Chicago after the firm of Postle & Fischer was dissolved in 1920 or 1921.

According to an item in the August 10, 1921, issue of Engineering and Contracting, architect David E. Postle had recently moved to Los Angeles. He practiced architecture in Southern California for several more years, mostly in partnership with his son George R. Postle. They were especially active in the Glendale and Pasadena areas.

As the original facade of the Inter-Ocean Building was retained in the rebuilding, i’s original architect should also be credited. This blog post about the building (which includes two nice photos) gives his name as W. Carbys Zimmerman.

This opened on September 1st, 1923. Grand opening ad in the photo section.

Before Barbee, Ascher Brothers had intended to build a 3000 seat theater in the building June 1918, which would have been the first very large purpose-built movie theater in the Loop. This obviously fell through.

FYI, I have a blog about the Clark Theater, and a 1938 flyer I found for that venue also advertises the Monroe. This suggests that, at least in 1938, the Monroe was part of the Lubliner & Trinz chain. If you want to see what was playing there (second run and B-pictures), go here: https://theclarktheater.wordpress.com/

Circa 1976 photo added credit Allan Zirlin. Both “Stateline Motel” and “Teenage Hitchhiker” had later U.S. releases than when originally released.