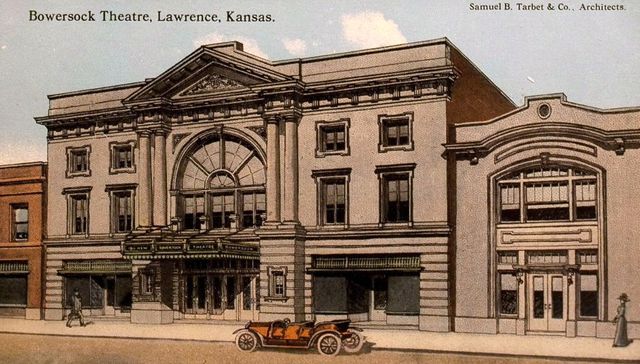 Rebuilt in 1911 and opening in February of 1912 as the Bowersock Opera House after fire destroyed the original Liberty Hall. It’s Beaux Arts facade, fireproof construction, rich acoustic qualities, and interior design make the hall as aesthetically pleasing and functional today as it was when it was built almost a century ago. By 1941, as the Jayhawker Theatre, it was operated by Commonwealth Amusement, but was gone from their management by 1950 and was closed in December 1957.

Interior renovation took place in the 1980’s. The present day Liberty Hall is a 1,050-seat-capacity rental facility with a main floor and full balcony. The Hall’s interior features a 37 foot grand vaulted ceiling accented with the original chandeliers. The present interior motif has been designed and executed by local artists and craftsmen. Liberty Hall is available for private functions, fundraisers and conventions and still operates as a theatre for concerts, movies and the performing arts. Liberty Hall also offers video rentals.

Here is an old photo. Note the vertical marquee with the name “Jayhawker”.

Liberty Hall was known as the Jayhawker for quite a while. My father worked for the company that owned a chain of theaters in the Midwest, the Jayhawker and Varsity among them, and my first job was as a cashier at the Jayhawker in 1958. The Liberty Hall restrooms are still the same…a real vintage experience.
Susan (Whitley) Peters

From 2010, photos of the Liberty Hall Theatre in Lawrence.

There is a Bowersock Opera House in Lawrence listed in the 1897-98 edition of the Julius Cahn Official Theatrical Guide. There are no street addresses in this Guide. So I don’t know how it fits in with this theatre, the Liberty Hall/Bowersock/Jayhawker. The Mgr was J.D. Bowersock, and it had 1,000 seats and was located upstairs on the second floor. It had both gas and electric illumination; the proscenium opening was 30 feet square,and the stage was 30 feet deep. There were 2 daily newspapers in Lawrence, plus 3 weeklies; and 2 hotels for show folk, the Eldridge and the Lawrence. The 1897 population of Lawrence was 12,000.