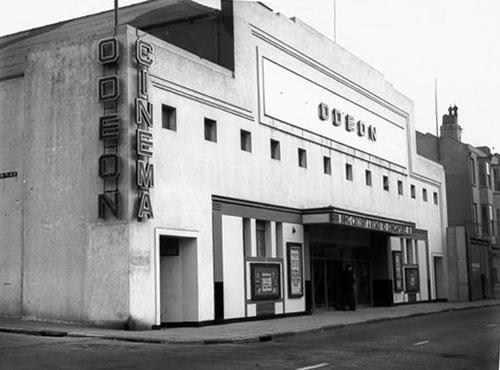 Opened on 1st February 1934 by the Odeon Theatres chain. Seating was provided on a semi-stadium plan, with 556 in the front stalls and 404 seats on a raised stepped section at the rear. On 14th September 1940, it was badly damaged in a German air raid, and 59 people were killed. It was restored and re-opened on 26th December 1940. The Odeon was closed on 5th November 1960.

Many firms and people tried to buy the freehold and or lease it, to reopen it as a cinema, as it served the whole of East Brighton. Odeon Threatres refused to sell and or lease the building. They reopened it on 12th January 1962 and ran it as a Top Rank Bingo Club until 1973.

In 1972, it became an independent bingo club for a while, then became a religious centre. It was demolished in January 1986, and a block of flats named Cavendish Court was built on the site.

Odd thing about the cinema the screen ran the length, not the width of the building so gave a bigger picture.

The street address of the Odeon was 38 St. Georges Road, Kemp Town, Brighton.

It was an original Oscar Deutsch built Odeon (this one a conversion of former stables) which opened on 1st February 1934, the architect was Andrew Mather. The seating capacity was 958 in a stadium style, with no overhanging balcony.

It closed as the Odeon Theatre on 5th November 1960 and lay empty until 1962 when it re-opened as a bingo club. It was used for a short while as a church after bingo ceased and was demolished in January 1986 and a block of flats built on the site.

In the early 1970s it was known as the Kemp Town Bingo and Social Club, presumably not under the Rank banner.

Photo of the Odeon Kemp Town in use as a church in 1985/6, shortly before demolition:–

A slightly earlier shot of the former cinema here:–

Here is a link to a page showing a couple of vintage photographs and a potted history:
View link