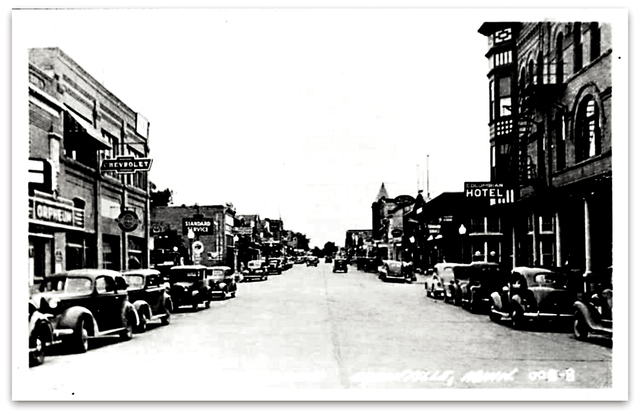 The Orpheum Theatre was opened prior to 1925. It had large stage for entertainers. Under stage was dressing rooms, coal fired furnace, prop rooms, etc. Large marquee with multiple colored lights. Main floor seating approximatly 640, balcony 120. Demolished in the 1980’s.

From the 1930s a photo postcard view of a busy street along with the Orpheum Theatre in Ortonville.

To drum up a little Concession business the matinee,“SLIM CARTER” was free admission.Saturday,Dec 9th.1967.

The Lew Henderson Players played this theater, The Orpheum, for one week commencing September 30, 1928. During that week they presented the Broadway success “RAIN”. The announcement appears in the local newspaper. I don’t have an advertisement, only an article which is difficult to read. Lew Henderson was my father, and I will be 90 years old in 5 weeks. I would be so happy if the advertisement could be posted.