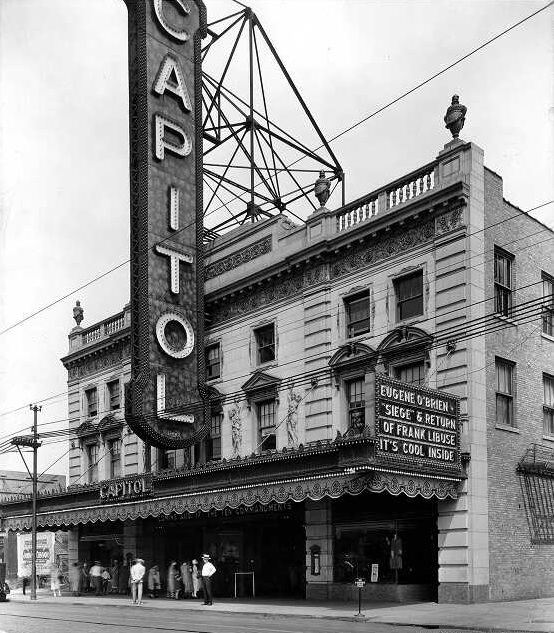 The Capitol Theatre was located in Chicago’s Auburn Gresham neighborhood on S. Halsted Street near W. 79th Street. Opened January 19, 1925 with House Peters in “The Tornado” plus ‘A Monster Stage Show’. The Capitol Theatre was designed by the famed theatre architect John Eberson. His other Chicago theatres included the Paradise Theatre and the still-remaining Avalon Theatre (now known as the New Regal Theatre). This very large neighborhood theatre had an auditorium done in the Atmospheric style, resembling an ancient Roman villa complete with statuary, vines, and miniature temples covering the organ grilles.

The Capitol Theatre’s lobby and foyer areas contained plaster copies of antique Greco-Roman reliefs, more statuary and mosaic tiled floors. Like the auditorium, the lobby had a blue starlit sky. At one time, the theatre also contained a 3/17 Wurlitzer theatre organ. The stage was 97ft wide and 30ft deep. It had a 62ft wide proscenium.

The Capitol Theatre was still open in July 1977, but was soon shuttered. The decaying theatre was demolished in 1985. The site remains an empty plot of land in 2022.

I did a little newspaper research. The Capitol Theatre closed in 1974.

I lived at 79th & Halsted from 1956 to 1964 in the Frank’s department store building, on the top floor above local loan. They were always getting robbed. I went to the capitol many times. It was my favorite place to go as a kid. Green mill pool hall across the street always had a crowd. I went to Oglesby, my brothers went to calumet. I miss the old place. lots of good memories.

T-bird79: never knew there was residential in the Franks' building. We moved on Peoria Street in 1965…just as the whites were leaving. An inglorious chapter of chicago’s race relations. There were so many nice things….the sunset club, capitol theater, walgreens with a soda fountain and restaurant, house of lum’s chinese restaurant, wimpy’s, Oglesby and Calumet used to be good schools, as well as Leo high school…loved spending my saturdays at the Capitol Theater watching triple feature karate movies.

your recollection has summed-up a boys weekend pleasure budget of those beautiful old days excellently! but would I have bought THREE popcorns?

Sad to look at all those vintage b&w archive photos. Those beautiful statues and light fixtures! I hope they were salvaged by appreciative collectors and not vandalized or thrown in the dumpster!

I saw movies at this theater including Disney comics and Davy Crockett. My father, Louis Harper, owned the Wimpy’s Grill hamburger diner just down the street. I was just a kid in the 50’s. All the 12c hamburgers I could eat free, buying popcorn balls and candy apples next to the theater, and watching kid movies in a Roman village with stars on the ceiling. It was a great life. My last visit to Wimpy’s was in 1968 and the whole neighborhood was totally different than my childhood 1950’s.

I lived at 6927 S union in the 50s and always walked to the movie with a quarter which gave me entry, candy, popcorn,and a drink. saw a news real, cartoon and two movies. WOW those were the days, moved out to Villa Park in 1957 and graduated form willowbrook high school 1963. Joined the USMC and was a veteran of the Vietnam War. Now live in Plainfield IL. If anyone went to DS wentworth grade school please email me at . My first girl friend was Betty Swanson, Mary Holland, and Bonnie Myer.