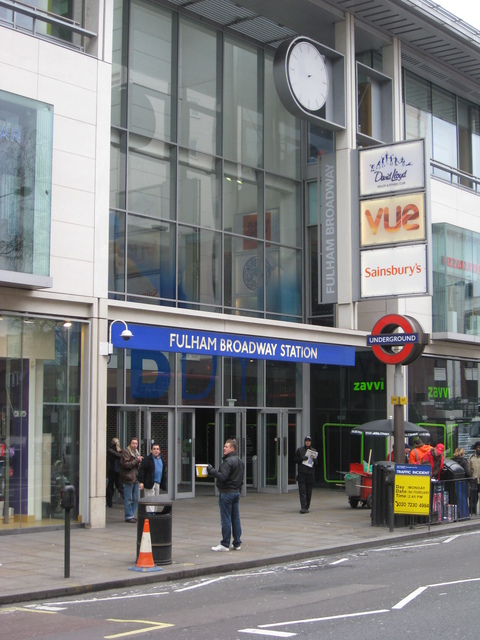 Located in the southwest London district of Walham Green. The cinema was opened on 11th October 2002 under the Warner Village banner, then was rebranded to a Vue cinema April 2004. It is located on the first floor of the Fulham Broadway Retail Centre, there’s not much signage so you really have to know the cinemas there.

The cinema hosted a charity screening of Al Pachino in “S1m0ne” and a Bra auction before opening to the public.

If you haven’t been to this cinema you really should, it is beautiful and well designed. I don’t usually like modern cinemas, but this one’s a real gem.

It boasts a 560 seater screen (no 6) which is one of the biggest outside the West End and a must for the latest films.

This multiplex opened as the Warner Village Cinemas on 11th October 2002.

This area of London is known as Walham Green. It has been without a cinema since the former Regal/ABC on North End Rd closed in 1972. That has since been demolished.

The former Red Hall Cinema/Gaumont on Vanston Place closed in 1962 and is still there, in use as a bingo club.

Why are there no pages allocated to the Regal and Red Hall?

Bill-Gibbs; Both the Regal Cinema and Red Hall Cinema do have pages on Cinema Treasures and are listed on the right of this page under ‘Nearby Theatres’ as the ABC Walham Green and Gaumont Walham Green.

Auditorium 6 is no longer being used to show movies. It has become an eSports arena. The other 8 screens are business as usual, but the signage within the mall for the ancillary use is so predominant that it’s more the ability to spot the concession stand as you walk by than a Vue sign that announces you’ve arrived.