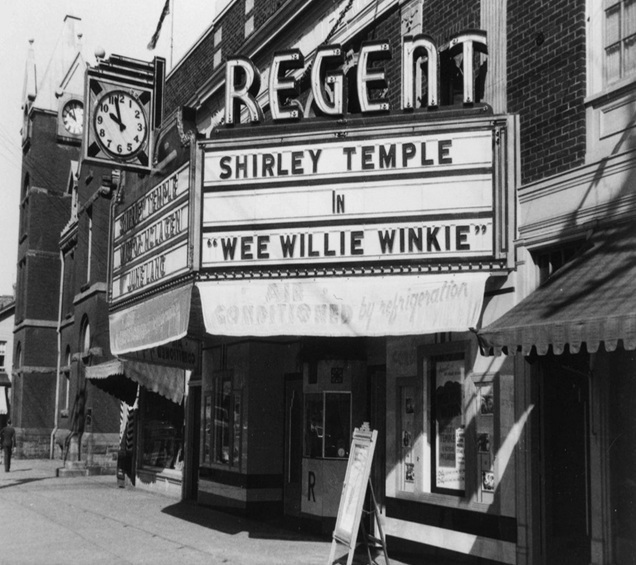 Located at King Street and Victoria Street, this beautiful theatre opened on October 16th, 1919 with Thomas Meighan in “The Prince Cap”. It originally seated 1,100 people. It was built by Famous Players and later the seating capacity was reduced to 878.

It was once known as the “handsomest structure of its kind between Toronto and Montreal”.

Sadly, it stopped showing movies by October 1989 and was unused for several years until in 2000, the owner of the site petitioned the city to destroy the building. Instead, they declared a historical structure and created the Regent Theatre Renewal Project. By 2014 the Regent Theatre was in use as a performing arts centre.

I drove by the Regent last week and saw the front of the theatre was covered for what looked like renovation work.
A Toronto promoter is supposed to be fixing the place up as a nightclub/theatre.

Incorrect mjc.. the new owner (who recently purchased it from the City after the Oshawa Folk Arts council threw the towel in due to finally admitting to inexperience in theatre restorations (and who shouldn’t have even touched it in the first place in my opinion)) is investing more than a million dollars to restore it to an 800-seat live theatre/concert hall.

The new owner accomplished the same task when he bought the Danforth Music Hall in Toronto. The scaffolding/covers is due to the deal which states he has until the end of February to remove the ugly blue paint from the front of the building.

I was talking about the new owner (promoter-whatever) who operates the Danforth Music Hall. From what I read in the Toronto Star a while back it read as if he was combining theatre events with other things. When I saw the work being done on the front I thought it was the start of the new renovations…which maybe it IS if it has to be done before the new work can begin.
Whatever is going on……congratulations and good luck to the new owner.I hated seeing the place looking so run down waiting for the city councillors to decide if they wanted to fix it up or wait and build a bigger new arts centre.

I was in Oshawa yesterday and talked to some of the construction workers at the Regent site. They told me they are fixing up the front and the interior.
That’s great news. Its supposed to be ready by this fall.

This theatre looks very similar to the Tivoli Theatre in Hamilton…

I wonder if it was the same architect?

As far as the local news coverage reported, it would be usable this fall but not fully completed until mid 2009. The new owner has plans to add apartments on the back end of the property where the parking lot is. The original restoration plans were to add meeting rooms and dressing rooms in that location.

I just hope he doesn’t cheap out and paint it the awful gaudy colour the Danforth interior is.. hopefully he follows some of the original design and paint colours.

Brian wrote:
“This theatre looks very similar to the Tivoli Theatre in Hamilton…
I wonder if it was the same architect?”

Brian: The architect for the Regent Theatre in Oshawa was J. McNee.
I have not been able to track down the Tivoli architect on the net.

This theatre is open.