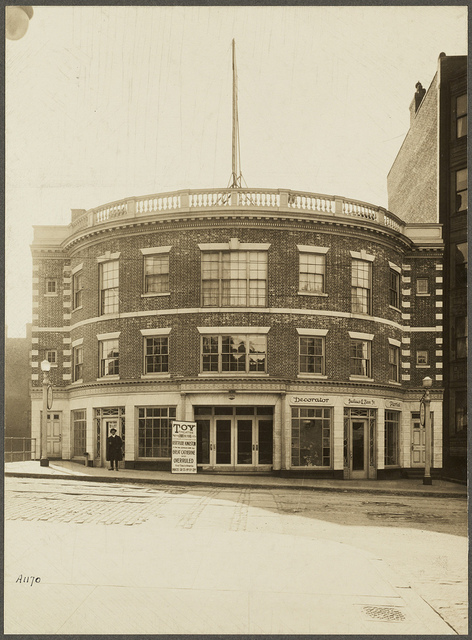 Opened in December 1914 as the Toy Theatre. Later renamed Copley Theatre. It became a movie theatre named the Capri Theater and in 1960 was remdeled to the plans of architect Louis Chiaramonte. It Ran “Breakfast at Tiffany’s”, “La Dolce Vita” and a revival of “Modern Times”.

One peculiar thing was its staircase, which was donated by Isabella Stewart Gardner. The stairs had been used at the opening of Fenway Court, ripped out of there when the tapestry room was created around WW I, and installed in the theatre.

Some of G.B. Shaw’s plays had their American premiere there. Next door was a lounge named ‘the Stage’.

Torn down for the exit ramps of the Mass Turnpike in 1962, when the ill-fated Capri name was moved to the Strand Theatre on Huntington Avenue.

Ron – thanks for that clarification. The entrance was at the corner of Dartmouth and Stuart sts. The entrance led back the full depth of that row of buildings to the theater proper, which was set back quite a bit from Dartmouth st.

Yes, the Copley/Capri was nowhere near Dartmouth Street. You walked in from Huntington Ave, to an inner foyer, and then turned right to enter the back of the auditorium. The left side of the auditorium and stage were on Stuart St. The original Toy Theater on Dartmouth Street was apparently jacked up and turned around and then reused for the Copley/Capri. I have never really understood what exactly was done to reuse the Toy Theatre. By the way, there was a real landmark building at the corner of Dartmouth Street and Huntington Avenue, the S.S. Pierce building. It was a handsome old heap and housed an upscale grocery and food shop. That building lasted at least as long as the Capri Theatre lasted.

I looked in the Boston Globe archive, and found some info on the Toy. It was founded in 1911 on Lime st, between Mt Vernon and Chestnut, at the bottom of Beacon Hill in an old stable. There are photo of both the interior and exterior in two articles. It was an amateur theatrical group that put on plays that had not been professionally produced in Boston. In Jan, 1913, Mayor Curley censored the play “Across the Border” when he got complaints about cursing, although he allowed it to go on when he removed on line.

The new theatre was built in 1914, and got a big write-up as well. A 1937 article gets the move date wrong, but says the name changed to the Copley after the move, and was run by both Jewett and Clive. In 1937, it was refurbished as the Shubert Copley.

Yes, it was a Shubert house when I first knew it circa-1948 or so. It was the least-used of their Boston theaters. Dark most of the time, it presented both plays and films but very infrequently. So when Sack took it over and renamed it “Capri”, it was a real re-launch.

Opened as a cinema with the ‘Capri’ name, I assume you mean? As the comments and description show, this theatre had a long history before that.

Yeah, I attended a play there in 1953, and it was an old theater then, going back to the World War I era.

An interesting ‘could have been’ for this theater. The book “Movie Roadshows; A History and Filmography of Reserved-Seat Limited Showings 1911-1973” mentions in the section on Around The World In 80 Days about future plans for the Todd-AO 70mm widescreen process. Mike Todd mentions he had an agreement to buy Boston’s Copley Theatre with plans for a chain similar to the Cinerama houses. Oddly it also mentions Todd opposed the sale of popcorn in theaters.

The book “Movie Roadshow” by Kim R. Holston mentions this theater running the film “Solomon And Sheba” for it’s Xmas attraction in 1959. It’s noted that the theater was newly refurbished that year (only 3 years before it was demolished) and that it had a 45 ft high marquee and 48 by 22 foot screen, both were “largest in the city”. Nice to have exact measurements for something but who knows if it was true.

The 1960 remodel as the Capri was handled by architect Louis Chiarmonte.