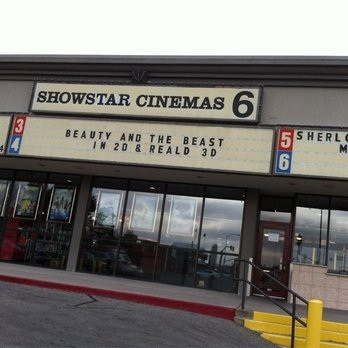 The Showcase Cinema 6 went through an array of owners and names. It opened as the Mann 6 Theatres Plaza 5400 on October 3, 1980. When Mann pulled out of Utah, Carmike took over and renamed it Plaza 5400. When Carmike filed bankruptcy, it closed the Plaza 5400 in the fall of 2000.

Consolidated Theatres reopened the cinema on April 13, 2001 renaming it the Showcase Cinema 6, with a discount policy. It went under the Cinema Star Banner. In 2009, it was operated by the independent Red Carpet Cinemas chain.

The theatre features a large entrance but unattractive building, the entire exterior of the building is painted white with a flat panel marquee over the entrance. The lobby is nice and spacious but the auditoriums are small and cracker box style. It is located just down the road from where the Loew’s Mid Valley was once located.

In late-2009, the theatre was taken over by Northern Utah Cinemas and is now renamed Showstar Cinemas 6. Closed September 5, 2016.

Per the January 2006 issue of “In Focus” magazine, this theater (along with Gateway Cinemas, Spanish Fork Movieplex and Five-Star Cinemas) has been acquired by “A new theatrical circuit dubbed Red Carpet Cinemas.”

NA can sue, they’re using their name and stenciling.

ha ha – true -but don’t forget about “Showplace” and “Megaplex” Cinemas. N/A owns the trademark on “Multiplex Cinemas” in the US (a fact Sumner Redstone is proud of in his book). Not sure about their other brands. Thinking about opening a Cinema Deluxe to stick it to Cinema De Lux?

Opened as Mann 6 Theatres Plaza 5400 on October 3rd, 1980. one of the titles of the movies was censored by the Deseret news. Reopened April 13th, 2001, as Showcase Cinemas. Grand opening ads posted.