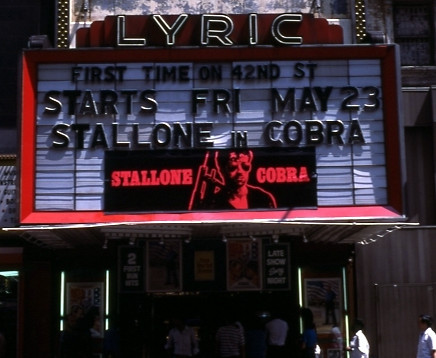 The Lyric Theatre was built in 1903 and designed by Victor Hugo Koehler. It opened on October 12, 1903 with “Old Heidelberg”. The theatre had two entrances, the larger facade being on the W. 43rd Street side, in a mix of Renaissance Revival styles, and the smaller facade, resembling a brownstone mansion, on W. 42nd Street. Both were heavily decorated with sculpture, including figures of goddesses, masks, and of course, lyres. The Adam/Empire style interior of the theatre featured an auditorium with two balconies, 18 boxes, and gilded plasterwork. The color scheme was originally light green and rose.

The Lyric Theatre was initially to have been leased to composer Reginald DeKoven as home to his American School of Opera, but the school went bankrupt before the theatre was completed. It ended up being leased instead to the Shubert brothers as a legitimate stage. Sarah Bernhardt & her company appeared here, as well as Mrs Patrick Campbell. During slack periods in the 1910’s and 1920’s the Shubert’s sub-leased the Lyric Theatre out to William Fox to screen movies. In 1925 The Marx Brothers appeared on stage in “The Cocoanuts”. The theatre was sold in 1927 and the new owners planned demolition, but the deal went sour. In 1928 Florenz Ziegfeld presented “The Three Musketeers” starring Dennis King and this was followed by the Cole Porter musical “Fifty Million Frenchmen” on November 27, 1929. After that production closed on July 5, 1930, the theatre see-sawed between movies and stage productions. One of the last stage productions was an all black cast in “Run, Little Chillin” (March 1, 1933-June 17, 1933, and the Lyric Theatre ended its legitimate days in 1934. In order to survive during the Depression, it joined many other W. 42nd Street houses in becoming a movie theatre. The Lyric Theatre remained a movie house until it closed in 1992 (by which time it was in poor shape). In 1996, after its remaining architectural elements were removed, it joined the neighboring Apollo Theatre in being razed apart from its facades.

“Twentieth Century-Fox opened [The Murder Game] yesterday at the Lyric Theater on 42d Street. At this showcase yesterday, where a boisterous mob had piled in to see "Our Man Flint,” topping the double bill, the first twenty minutes of the little picture were inaudible. Suddenly, though, you could have heard a pin drop. Why? Well, there’s this guy who suddenly catches on to a plot by his pretty young wife and a blackmailing handyman to do him in. For money, of course…"

Mike, love this! Ken Roe how about a “like” button on CT?

And “I’m Not a Robot” for security purposes.

the intro should also note that filmmaking pioneer William Fox rented out this theater for some of his big films such as A Daughter of the Gods and The Queen of Sheba and Sunrise.

The current Lyric Theatre is not the same Lyric that was originally “legit” and a cinema in its final life. History detailed here

to Comfortably Cool- I am well aware the current Lyric Theater which houses the truly spectacular play Harry Potter and the Cursed Child is not the same Lyric that William Fox used for exclusive engagements of his most spectacular films of the 1910s and 1920s. since the intro at top is for the original Lyric Theater I’m surprised the info about Fox’s leasing of the theater wasn’t included.

Since this page and introduction are about the original Lyric Theatre, then Joe’s comments are perfectly apt.

Perhaps the introduction should stop at the end of the second paragraph, and omit the new Lyric’s information and history as a legitimate play house.

Lyric in 1971 among others in below link.

In what year did they stop updating the billboards, with posters from coming attractions, above the Lyric?