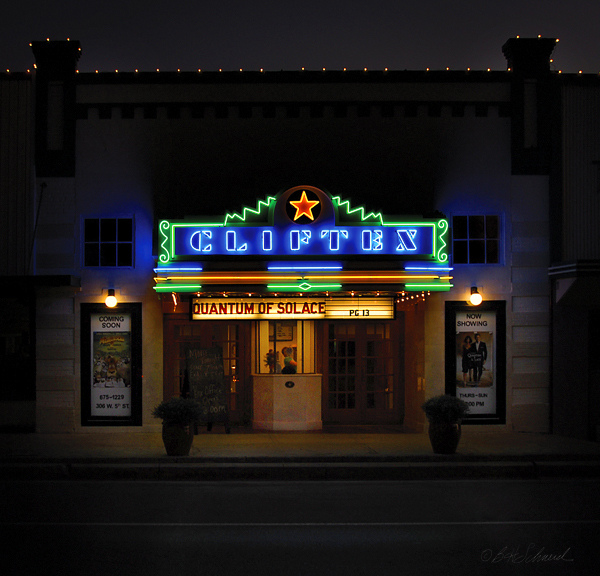 The Queen Theatre was opened in 1916. Later renamed Cliftex Talkies it was remodeled in 1935 and re-named Clifex Theater. Currently, this theater is only open Thursday through Sunday, in the evenings, and shows a new feature each week.

There is another photo on this page:
http://tinyurl.com/ya95xv

CLIFTON â€" Dennis Burris stretches out a strip of film from a movie reel.

â€œThis came from the old Hico Theatre,â€ he says. â€œI donâ€\t know whatâ€\s on it. It might be some famous country western star from the 1930s.â€

That film probably wonâ€\t be among the movies to be shown at the CLIFTEX, but itâ€\s indicative of a new business strategy for the 91-year-old theater, which is experiencing a renaissance by revisiting the past.

In October the theater, which lays claim to being the oldest continually operating movie theater in Texas, showed the John Wayne classic western Red River. The CLIFTEX has begun regularly screening classic movies on an alternating basis with current-run films. Classics shown since Red River include Casablanca, Paper Moon and A Fistful of Dollars.

Burris recalls the reaction of theater-goers after showing one of those old films at the CLIFTEX.

â€œThey stood up and applauded the blank screen,â€ he says. â€œI had people tell me how it brought them back to their childhood.â€

CLIFTEX owner W. Leon Smith, who also owns The Clifton Record newspaper next door and is the cityâ€\s mayor, says the theater had shown the occasional classic film such as The Man Who Shot Liberty Valance. But now the theater hopes to find an audience that will make offering older movies a viable business enterprise, he says.

Many people have watched movies like Casablanca on TV, he says, but the movie screen provides nuances and tidbits to viewers that may otherwise go unnoticed.

But getting those old films to Clifton from the movie vaults in Burbank, Calif., doesnâ€\t come without a hefty price tag, he says. Besides the movie rights, freight for shipping those reels of film runs about three times the amount for a current feature. Burris figures that higher price in part includes extra for insurance.

He gushes about the Ma and Pa Kettle reels. Although the movie was originally filmed on nitrate, the CLIFTEX received an acetate version made from the master.

Since Smith bought the CLIFTEX from Scott and Luann Sandahl in 2000, the theater has undergone improvements such as new air conditioning and heating. Its exterior is made of limestone, which Burris says will easily outlast him. Last year, a large section of seats in the middle section were replaced. In a nod to modernity, those now have cupholders.

The theater seats 199. It would have more than 200 if not for pulling out some seats to provide a place for patrons in wheelchairs.

Burris, 62, has infused the historic theater with new ideas since being hired by Smith in July to manage it.

He hired a teenager to dress like Spider-Man and walk outside the theater to promote Spider-Man 3 when it was shown last summer. Hot dogs and nachos have been added to the reasonably priced theater menu in the almost-claustrophobic lobby.

Tickets cost just $2 and are free to those 2 and younger. With gas prices what they are, Smith says he wants families to feel they can afford a night out at the movies. The businessman in him, however, has him re-examining the ticket price.

The lure of history

The CLIFTEXâ€\s history was the big draw for Burris, a film aficionado and longtime theater manager who even appeared on screen in the 1997 TV movie Rough Riders with Tom Berenger.

â€œThe first moment I saw it, I loved it,â€ he says of the theater.

Notorious outlaws Bonnie and Clyde were patrons of the CLIFTEX, Burris says.

â€œNow I donâ€\t know how many times they came, but Bonnie loved movies and they used to have a camp just outside Clifton,â€ he says.

Burris, whose first job was as a projectionist at a drive-in in Palestine when he was 14 or 15, can talk at length about the 35-millimeter reels, the expensive bulbs, the sound poles and the 1930s Art Deco sidelights of the CLIFTEX. The two Century projectors from the 1930s in the projection booth have been refurbished some, but they still work and are used at every showing.

Theater-goers will find Burris in that small projection room, which he notes is completely surrounded by metal. It was a way to help keep fires from spreading through the theater, a huge concern in those days when projector bulbs could easily burst into flame.

When Burris isnâ€\t at the theater, heâ€\s running the Western Motel in Mart. But running the CLIFTEX is his joy.

Smith hopes this new initiative will prove successful and that the CLIFTEX can continue for years to come. Clifton had three theaters in the early 1900s. The CLIFTEX is all that remains.

The Cliftex Theatre just reopened after closing in September for a complete restoration and renovation which lasted about 3 months.

Also the official website above has many photos of various phases of the restoration process!

I had the pleasure of visiting the Cliftex last Friday, to see “G.I.JOE: THE RISE OF COBRA”. The movie was okay, but the true pleasure was to see it in a single screen house, whilst munching on fresh-made popcorn, just like back in the day.

Check them out on Face Book!