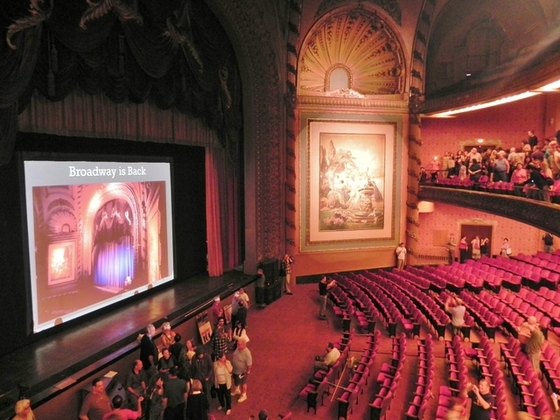 LOS ANGELES, CA — After a $1 million restoration by the Delijani family, which also owns the Los Angeles, State, and Tower theaters, the Palace Theatre has reopened for live shows and occasional film screenings. The theater hosted three sold out screenings of “Sunset Boulevard” yesterday and delighted audiences with its refurbished and restored appearance. Programming will begin on July 28th with a “live circus-burlesque show.”

Developer Ezat Delijani, 34, shares his memories of “running around and playing” in the Los Angeles in the 1980s with the Los Angeles Times: “My dad was so thankful to this country for taking us in [after fleeing the Revolution in Iran]. These four theaters are [his] legacy.”

(Thanks to “Hollywood90038” for the terrific photo)

This is a wonderful story! Thanks to Mr. Delijani for his loving restoration of the Palace Theatre. Original paint colors, wallpaper arrangement, and new seats sounds great! I hope the State and Los Angeles can also be revitalized. I’ve enjoyed visiting all of them when in LA.

Wow! When I was in LA in April and photographed the dormant looking Palace I had no idea what was going on behind the scenes. Thank you Mr. Delijani! It sounds like four of our Broadway Cinema Treasures are in good hands!