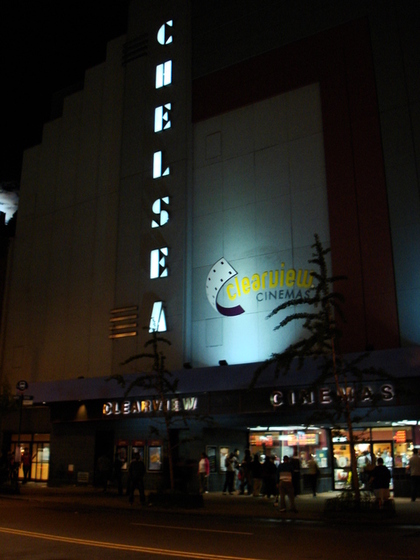 Bow Tie to become eighth largest motion picture exhibitor in the U.S. with the largest number of theater locations in the New York metropolitan area.

RIDGEFIELD, CT and BETHPAGE, NY — Bow Tie Cinemas and Cablevision Systems Corporation (NYSE: CVC) today announced that they have entered into a definitive agreement under which Bow Tie will acquire substantially all of the Clearview Cinemas theaters from Cablevision. Following the acquisition, Bow Tie Cinemas will become the eighth largest theater circuit in the United States with 388 screens in 63 locations in seven states. The company will have the largest number of theater locations in the New York metropolitan area upon closing the acquisition. Financial terms of the transaction were not disclosed.

Founded by B.S. Moss over 100 years ago, Bow Tie Cinemas is a four generation, family-owned business and the oldest cinema company in the United States. The company currently owns and operates 22 movie theaters with 177 screens in Colorado, Connecticut, Maryland, New York and Virginia, including two locations scheduled to open this summer in downtown Saratoga Springs and Wilton, New York. Bow Tie is led by Charles B. Moss, Jr., and Ben Moss, the third and fourth generations of the Moss family, respectively.

“This is a transformational acquisition for Bow Tie Cinemas and an exciting new chapter in our company’s rich history,” said Ben Moss, CEO of Bow Tie Cinemas. “Going to the movies is a tradition deeply rooted in the local community. Bow Tie makes long-term commitments in the communities where we own theaters by building local partnerships, employing local people and engaging with our patrons. Our mission is to return style and elegance to the movie-going experience™, and we look forward to applying the same approach at our newly acquired locations.”

Bow Tie will acquire 41 Clearview Cinemas movie theaters, including Chelsea Cinemas, which will become its Manhattan flagship. Bow Tie will continue to operate Chelsea Cinemas as a prime venue for iconic industry events such as the Tribeca Film Festival, the New York International Latino Film Festival and the Asian American International Film Festival, for community programming, as well as for world premiere screenings. Bow Tie also intends to further develop the relationships between Chelsea Cinemas and the local community. The Ziegfeld Theatre in New York City will not be acquired by Bow Tie but the company will manage the Theatre on Cablevision’s behalf.

Following the close of the transaction, Bow Tie intends to make a substantial investment in the newly acquired Clearview theaters, including Chelsea Cinemas, to fund key upgrades that are designed to enhance the movie-going experience for customers, including: digital projection and 3D installations, concession stand upgrades, decorative improvements, and point of sale technology that will allow Bow Tie to enhance its customer loyalty programs.

Bow Tie Cinemas is a four generation family-owned entertainment business founded over a century ago by motion picture industry pioneer B.S. Moss. The company’s mission is to return style and elegance to the movie-going experience™. Bow Tie’s storied history has spanned the eras of the Nickelodeon, Vaudeville and the birth of the motion picture theater. Today Bow Tie is the oldest cinema company in the United States and currently owns and operates 22 movie theaters with 177 screens in five states. The company provides long-term investments to the communities it serves and is dedicated to offering the best possible presentation and service to its patrons. For more information, visit www.bowtiecinemas.com.

Cablevision Systems Corporation is one of the nation’s leading media and telecommunications companies. In addition to delivering its Optimum-branded cable, Internet, and voice offerings throughout the New York area, the company owns and operates cable systems serving homes in four Western states. Cablevision’s local media properties include News 12 Networks, MSG Varsity and Newsday Media Group. Cablevision also owns and operates Clearview Cinemas. Additional information about Cablevision is available on the Web at www.cablevision.com.

(Thanks to Kris for providing the photo.

There’s more than 41 cinemas on Clearview website so I am curious whether they will take over Philly burbs cinemas of Bala & Anthony Wayne.

I have found out that our local 2 Philly burb cinemas will indeed become Bow Tie. Congrats to Bow Tie for their growth and let’s all say together “Long live the Ziegfeld!”

Why would they not take over the Ziegeld. That should be there flagship theater. How sad.

i wonder what will happen to free movie tuesdays….RIP to that.

I know this is wishful thinking but we can only for some new screens on the UES!

BowTie here in Annapolis, MD is quite good and have been one of my favorite venues for years. The Mall and Harbour 9 are all digital projection and Dolby 7.1. Actually, they continued what was Crown Theaters and, initially, kept with the personal touch by having personal intros to the movies. However, they stopped. :P They also stopped with the in theater advertising for awhile, then that started up, again.

As far as their loyalty program, it needs fixing. I had a BIG disagreement with their staff about their point accumulation system and redemption. When I redeemed a soda voucher, it zeroed out my points to start all over again. It does not continue like the ones for Regal and AMC do. To this day, I am not sure if they’ve fixed it.

There was a lady at corporate, whose number I kept on my old cell phone but now lost it..she was nice enough to restore my points. I’m close to the 100 pt mark to where they give you a free pass, soda and popcorn. I’m hoping to redeem the incremental freebies; more passes, popcorn, etc. since the point values have not zeroed out.

They need to improve their concession offerings. Perhaps they could take a cue from Cinemark and make things more self service. I prefer to get my own soda with the right amount of ice.

It’s great news – I’ve visited a few Bow Tie locations in CT – including their first “Criterion Cinemas” in New Haven (in its first 5-screen configuration) and found the theater and service to be first rate.

As a result of the cablevision bowtie transaction, several of the struggling theaters will close in may. Among them, Clearview 1st and 62nd in manhattan and chester cinema 6 in nj.

With the closing of the 61st & 2nd (BTW, a horrible theatre name) BowTie will have only one theatre in Manhattan (Chelsea). The Clearview theatre in Greenburgh is a nightmare. I hope BowTie does something here as it is the only convenient theatre showing foreign and indies exclusively. I was discreetly told by one of the employees that since the theatre does good biz being exclusive and “the only game in town” that Cablevision wasn’t going to improve it. I hate going there but I have no option. I’ve only been to a BowTie theatre once (in CT) and was impressed. Hope they do the right thing here.