On The Screen: Cinerama 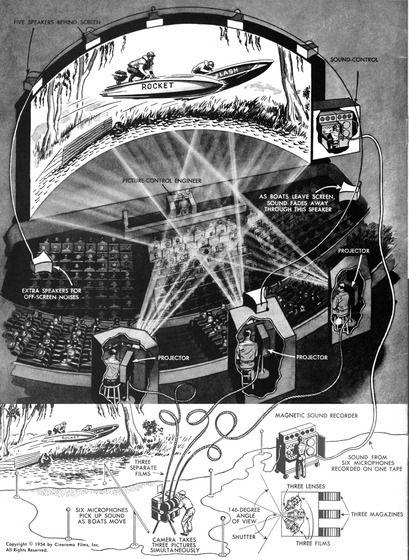 Is there a Cinerama theatre near you? Cinerama was a novel film process developed to create a unique experience at a time when movie theatres were beginning to feel the effects of television’s popularity.

The brainchild of engineer Fred Waller, Cinerama was devised as a viewing experience that would capture the full vision spectrum, immersing viewers in the film experience.

This diagram, published by Cinerama Films, Inc., gives the clearest idea of the complexities involved in the Cinerama experience. At the bottom you see a camera man recording on three film reels, capturing a broad view. At the same time, multiple microphones are placed to capture a wide range of sounds. At the top, a trio of projectors work to cover the curved three part screen.

While the diagram does it’s best to sell Cinerama, it points out one of the process’ biggest flaws. Looking at the auditorium, it’s clear that people in the center would have an immersive experience, but those on the farther ends certainly were clearly at a less enveloping event. 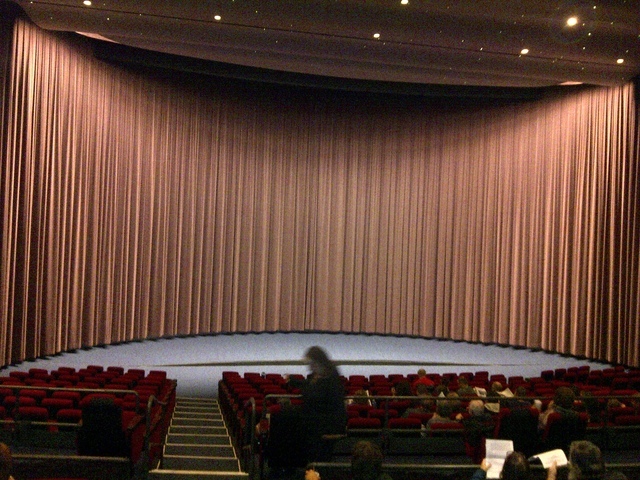 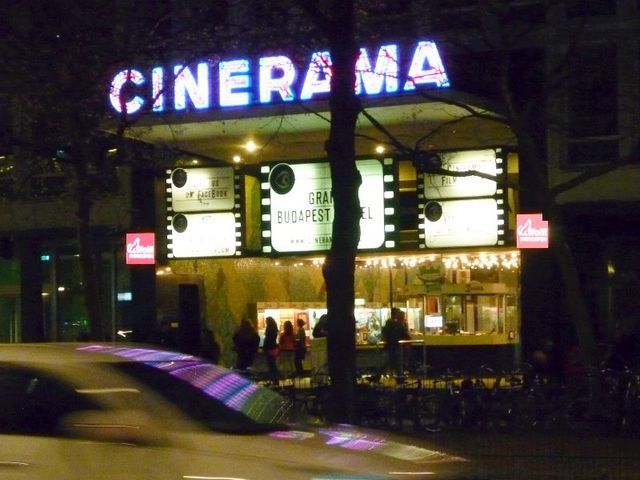 Top pic may be of the Seattle Cinerama. It was built in the 60’s and has been remodeled a few times and is now one of the most high-tech theatres on Earth. Still has the original sized screen I believe. Was just revamped as a theatre again recently. Even better sound. Now has stars in the ceiling. They also use the curtain I think.I once saw Blade Runner here and it was in a Cinerama style lense process. Wrap around screen. Also saw 2001 here in the first showing of this film. Quite an experience.

It’s too bad that there isn’t a Cinerama here in the Boston area. I wish there were.

MPol:
There was a CINERAMA theater in North Carolina that also have a ton of reserved seat engagement showings during the 1950’s and 1960’s.
Charlotte: Carolina Theater

Saw “This is Cinerama” at the Warner in New York in 1953. Sat way up in the balcony, but it was still a thrilling show. Saw it again during its short run at the New Neon in Dayton, Ohio a few years ago. Most impressive was the 3-strip screening of “How the West Was Won” at the ArcLight Cinerama Dome in Hollywood.

The picture on top is indeed the seattle Cinerama. It has been remodeled again since the picture was taken. If the screening of 2001 that you saw was about 3 years ago, it would have been Paul Allen’s own personal 70mm print (newly struck from the negative) for this screening. If you saw it on a Saturday night, I would have been the projectionist who ran it. When running film (rare these days but it does happen) the Cinerama is a 2 projector manual changeover booth with Kinotone 35/70 machines. Theatre now has Dolby Atmos sound and 6K digital laser projection as well.

The second picture is the Cinerama cinema in Rotterdam. It’s only a Cinerama by name. Another cinema which can show original Cinerama movies is Pictureville in Bradford UK. http://cinematreasures.org/theaters/3673

Never seen a cinerama before? are there any in Las Vegas, I really would love to go to one. It looks like these are from different chains of companies however but the one on the bottom looks like Buzz Light Year. Really cool, thanks for this post.

I like this website so much it’s really awesome. I have also gone through your other posts too and they are also very much appreciate able and I’m just waiting for your next update to come as I like all your posts. Happy Good Friday Images

I really tried to picture out the actual cinema. I love to visit here soon. cement contractors

Wow! Such an amazing and helpful post this is. I really really love it. It’s so good and so awesome. I am just amazed. I hope that you continue to do your work like this in the future also slitherio

This is definitely a great article. Thank you so much for taking the time to run 3 detail all of this for all of us. It was a great guide!