Park Slope, Brooklyn, NY - A Eulogy for the Pavilion, the Worst Movie Theater Ever 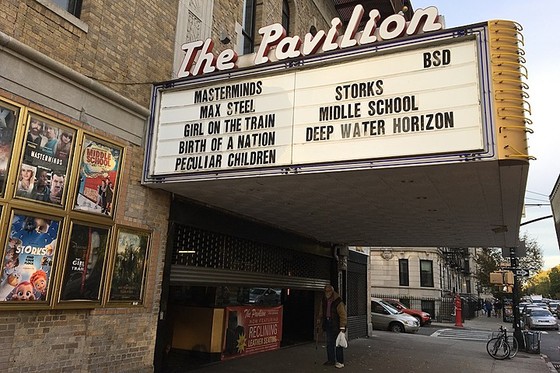 From Screen Crush: My friends, thank you all for coming here today to say goodbye. The Pavilion is gone.

The theater will be transformed into an arthouse by the owners of Williamsburg’s outstanding Nitehawk Cinema. Today was supposed to be its last day; as of lunchtime yesterday, the theater was still selling tickets for screenings on its website. Then, suddenly, all the screenings vanished. A moving truck showed up outside the theater. The building’s metal shutters were brought down. And just like that the Worst Theater Ever was no more. We never even got to say goodbye. (Or to tell them to correct the spelling of “MIDLLE SCHOOL.” [On both sides of the marquee.])

It was an anticlimactic end for a movie theater, but a fitting one in this case, for this was the Pavilion, a theater that somehow turned gross and persistent incompetence into a functioning business model for well over a decade. Alexander Pope famously wrote “to err is human, to forgive divine.” If that is true, then the Pavilion was the most human movie theater that ever existed, and its customer base was borderline godly.

A lot of you only knew the Pavilion after its health started failing. You should have seen it when it was younger. It was beautiful. It was born in 1996, the child of an old movie house, the Sanders, that lived and died on the same corner as the Pavilion, at 14th Street and Prospect Park West. In its youth, the Pavilion was a local favorite. Back then, no one in Park Slope had a bad thing to say about it.

Things took a turn after the Pavilion’s radical surgery in the mid-2000s. It was diagnosed with a terminal disease of not enough screens, so its three auditoriums were split into nine of varying size. Looking back now, that was the beginning of the end. The Pavilion soldiered on, but it was never the same again. Ownership changed and the new people in charge took less and less interest in the Pavilion’s upkeep. By the late 2000s the place was a shell of its former self. The people who loved it will tell you it was hard to watch.

There’s another old expression, this one not by Alexander Pope, that warns never to speak ill of the dead. And so it would be inappropriate of me to list some of the Pavilion’s many, many, many flaws, issues, and problems here. It would be wrong, for example, to go to the theater’s Yelp page, where it had the lowest rating of any theater in New York City, and pull excerpts from the hundreds (literally hundreds) of one-star reviews.

I choose to focus on the good times and not the bad, like the occasion where a customer was told their debit card was declined, while the clerk repeatedly charged them for snacks they never received.

That’s an honest mistake; it could happen to anyone. The same goes for the screens that were dirty, ripped, or broken, sometimes for years. A lot of movie theaters have screens that are cracked “as if someone punched it.”

The Pavilion got forgetful later in life. This is just what happens when you get older. I sometimes forget where I left my keys. The Pavilion forgot when it was showing movies. Or it would advertise showings that didn’t exist, or blame the screw-ups on ticketing websites like Fandango.

At the end it got so bad, the Pavilion even thought it had an IMAX screen. The poor thing was delusional.

Those of you with seniors in their lives know how rough those last days can get. The Pavilion lived so long, its body literally began to fall apart.

Temperature was always an issue. In the summer, it was too hot.

In the winter, it was too cold.

Or sometimes the heat worked, and no one bothered to turn it on.

The customers weren’t the only ones who froze; the movies froze too. (I personally witnessed this happen during a screening of The Other Guys.)

And when the popcorn machine worked, the water fountain didn’t.

There were other water troubles. When it rained outside, it rained inside.

At least we hoped that was rain:

Of course, you probably heard the complaints about bed bugs. Rumors and supposed sightings of the critters plagued the Pavilion all through its later years. To be honest, I always thought these were overblown; a lot of hearsay with little evidence.

There were definitely rats though.

It’s not all the Pavilion’s fault. Sometimes the customers were just absurdly demanding!

Just because you saw a rat (okay, two rats) you want your money back? You already watched 20 minutes of the movie! That’s almost a third! People can be such freeloaders.

At the very end, the Pavilion even lost control of its bowels. It was just ugly.

Euthanasia is illegal in this country. But I tell you this, my friends: Seeing what became of our Pavilion, I wished it wasn’t. Someone needed to put this poor suffering creature out of its misery.

The Pavilion was finally put out of its misery yesterday. It will no longer have to endure customers and their ridiculous complaints about the lack of air conditioning or heat or toilet stall doors. It won’t have to hear people demand their money back just because their seat was broken, or the floor was sticky, or there were absolutely no lights on in the auditorium before the movie began, forcing them to fumble in the dark with their iPhone flashlights, or the film projector was so caked in dust it looked like it hadn’t been serviced since Thomas Edison was alive. It won’t have to call the cops on a diabetic who tried to bring fruit in to the theater. Fruit! Can you believe it? What a world.

Yesterday, I wrote a consumer guide to good movie theater projection; what every theater should do to give their customers their money’s worth. It was 1500 words long, and included excerpts from a lengthy interview with an expert on theatrical presentation. If I wanted to save time, I could have just written “Look at the Pavilion, then do the opposite.” Back in 2012, I called it “the worst theater ever.” Some people thought I was being hyperbolic; surely, somewhere, they must be a worse movie theater than the Pavilion.

There wasn’t. If there is a hell, the Pavilion is now serving customers there. They won’t even have to get the air conditioner serviced. 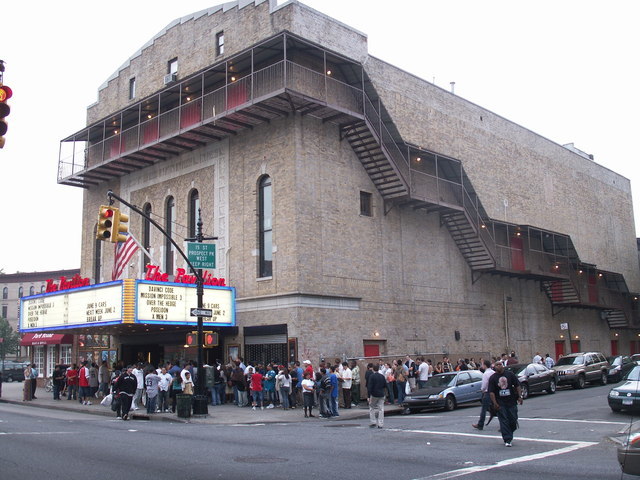 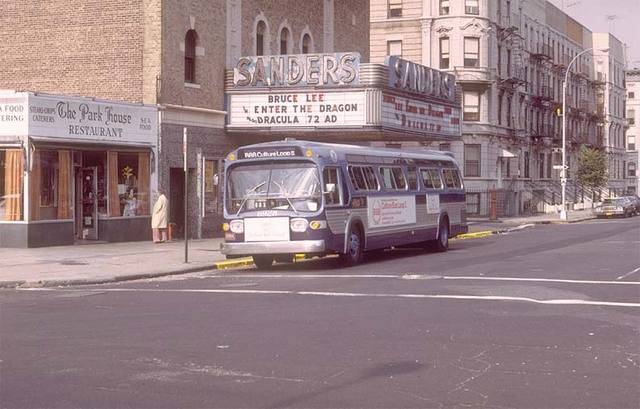 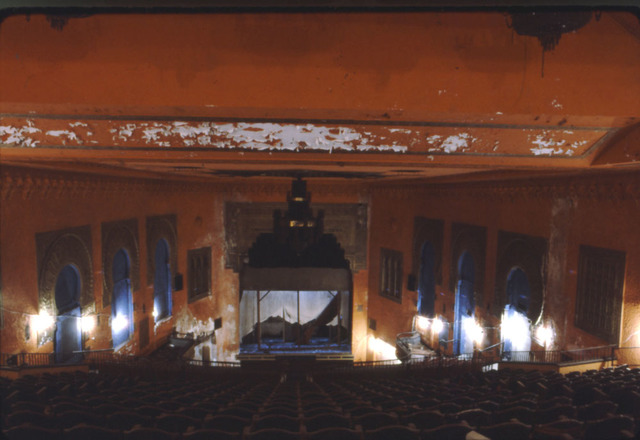 good riddance, I have only been here one time for the latest Jason Bourne installment back in summer 2016.There was a plethora of problems here, the AC broke..and we all had to move to a different theatre…I welcome the NITEHAWK people there, I have spent quite a many days and nights in there drinking and eating and watching films…they will be a great addition to the Park Slope citizens.

There are a few interesting points soon enough in this posting but I do not know if I see they all center to heart. There is some validity but I’ll take hold opinion until I consider it further. Good write-up , thanks and then we want much more! Added to FeedBurner at the same timehttps://https://193.168.195.169.com

Hey! Someone in my Facebook group shared this site with us, so I am looking. I really appreciate the information. I am a bookmark and will be it tweeting to my disciples! Blog design and large outstanding and style. ruay vip

Well done! I thank you your contribution to this matter. It has been insightful. my blog: how to get rid of love handlescreampie

There is noticeably a bundle to comprehend this. I suppose you have made certain nice points in functions also.nclex practice test

Thank you for your submit and also fantastic suggestions.. also My partner and i furthermore believe work will be the main part of acquiring accomplishment.minecraftskindex.info

If you still aren’t sure if you need a lawyer for your particular case, talk to an attorney at Boyd Law Los Angeles at no charge or obligation.family lawyer

Thank you so much for such a well-written article. It’s full of insightful information. Your point of view is the best among many without fail.For certain, It is one of the best blogs in my opinion.http://www.createemailaccounts.net/

Jesus bless us, your blog will be the idea specialist for my own business enterprise. My spouse and i want we can perform a few online business with each other.Aplikasi Visa AS

Thank you, I’ve just been searching for information about this topic for a while and yours is the greatest I’ve discovered till now. But, what in regards to the conclusion? Are you sure concerning the supply?pg slot ฝาก20รับ100

This particular papers fabulous, and My spouse and i enjoy each of the perform that you have placed into this. I’m sure that you will be making a really useful place. I has been additionally pleased. Good perform!click here