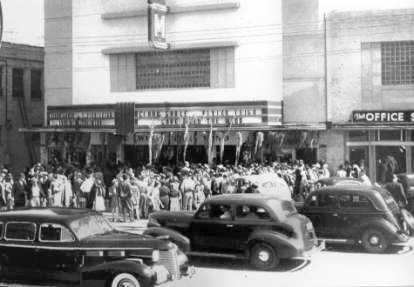 From The Kilgore News Herald: The Crim Theater that stands on South Kilgore Street has been part of Kilgore since 1939 but its history stretches back to 1920.

The current Crim Theater officially opened on June 21, 1939. Movie theaters in Kilgore, though, have been traced back to 1911.

“My Man,” starring Fanny Brice, was the first movie to use the Dixiephone with “The Jazz Singer” following along shortly after.

The name was officially changed to the Crim Theater when C.O. Murphee purchased the Dixie. Fire destroyed that theater in 1931.

“Built as the ‘flagship’ of Crim’s theaters, it was to be the finest theater in the East Texas area,” the historical narrative states. “It was designed in the streamlined art deco style popular at that time and was called a ‘modern-classic building.’”

According to the book “Kilgore: A Boom for the Ages,” former Kilgore Mayor Roy H. Laird said, “[The] new edifice is a tribute to the future of Kilgore as a metropolis.”

The theater, which cost $150,000 to build, seated a little fewer than 1,000 people and was designed with the audiences in mind.

“The builders ‘spared no detail in which could possibly contribute to the pleasure and comfort of our audiences,’” the narrative states, quoting the theater manager John Knox Lamb.

The seats and carpeting reflected the interior color scheme of the theater and the projection machine – the “Super Simplex” – was just as advanced as the seats.

Although the neon letters on the Crim Theater marquee are lit together, the letters flashed one at a time and then together when the theater was in operation.

The first ticket sold to attend the opening night black-tie affair showing of “Only Angles Have Wings” was sold to John N. Peterson, of Kilgore, in a public auction attended by about 3,000 people. Peterson paid $613.80 with the proceeds benefiting the Kilgore Daily News Milk Fund.

“The Crim continued for many years as center for the finest entertainment in the style set by its grand opening,” the historical narrative reads.

The Crim Theater hosted the world premiere of the 1948 film “Strike It Rich,” which was filmed in Kilgore. The theater’s presence in Kilgore’s social and entertainment scene remained steady through the late 1950s.

Children could pay nine cents to spend the day at the Crim watching cartoons, a newsreel, a serial and two features in the comfort of the air conditioned theater.

When TV entered people’s lives and kept them at home instead of at the theater, the Crim was eventually closed and sold. After a stint as a warehouse, the theater has been vacant since the mid-1960s.

The public’s continued interest in the theater and its significance in the town has led the city to look forways to restore the building.

The Texas-New Mexico office of the National Trust for Historic Preservation supported the goal of restoring the theater and recommended it be nominated to the National Register of Historic Landmarks.

Although the city was able to restore the theaters façade, the interior still looks like that of a vacant theater.

The city has copies of the original architectural drawings to use as reference points for possibly restoration projects in the future, though.

“The possibilities for the old theater are numerous, but immediate action should be taken to preserve it and to insure that it once again may contribute to the life of the city,” the narrative concludes. “It is imperative that a plan for the restoration and adaptive reuse of this building be developed. An architectural consultant needs to develop a phased plan for the stabilization and renovation of the Crim, to formulate a design for appropriate space utilization, and to set a renovation budget.” 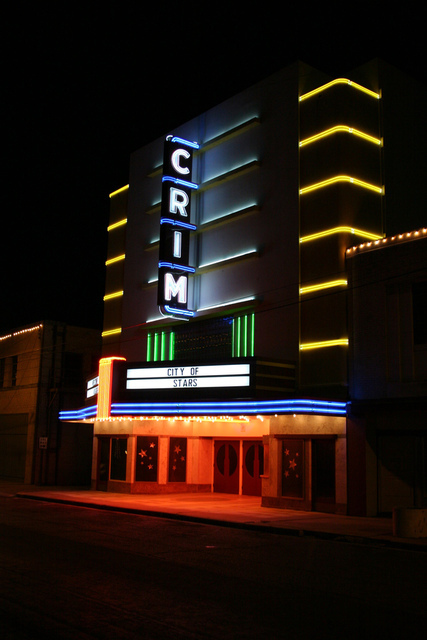