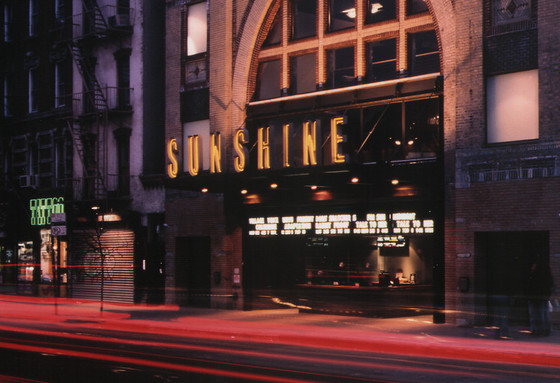 From IndieWire.com: The clock may be ticking for New York City’s Landmark Sunshine Cinema. The building that houses the arthouse theater on Manhattan’s Lower East Side has been up for sale for more than a year, and while no buyer has materialized yet, some feel it’s only a matter of time before real estate developers turn the beloved cinema into a high rise apartment building.

Though a number of media outlets have reported that the Sunshine’s lease will be up for renegotiation at the end of 2018, the existential threat facing the theater has less to do with its lease than the possibility that a new buyer will demolish the building and replace it with a towering apartment complex. Built in 1898, the property has a reported price tag of more than $35 million.

Ted Mundorff, president and CEO of Landmark Theaters, told IndieWire that turning the theater into a high rise is easier said than done. “It would take years for anyone who’s going to pay the kind of money they’re looking for to demolish [the building] and construct something,” he said. “At this point I don’t see any imminent danger of us leaving the property.”

Though Mundorff said Landmark “loves” the Sunshine, calling it one of the “best properties in Manhattan,” he acknowledged that the company has expressed concern over the theater’s sustainability before. In 2012, the local Community Board denied Landmark a liquor license for the Sunshine that representatives of the company said was critical to keep the theater open in the long term, given its steep annual rent of around $200,000. Landmark was planning to invest $1 million to renovate its theaters and provide dine-in food and beverage table service, a move that would have brought in crucial new revenue, but local residents feared that the addition of alcoholic beverages would have a negative impact on the theater, and the plans were scrapped.

“That was pretty shortsighted of folks,” Mundorff said, adding that more than a dozen Landmark theaters serve alcoholic beverages. “It’s not like theaters that have alcohol have people falling down [drunk]. They get their glass of Chablis and they go in the auditorium.”

So what would the end of the Sunshine mean for New York City film culture?

Independent producing and distribution veteran Ira Deutchman noted that the Sunshine is one of the few venues in New York City where quality independent films can still generate substantial box office revenues. “In that part of town, the only other alternative is the Angelika, where the grosses can also be decent for independent movies, so it would literally be cutting the opportunities in half,” Deutchman said.

Bleecker Street Media president of distribution Jack Foley called the Sunshine “an extremely important cinematic and cultural center for the city,” and a “crown jewel” of the Landmark brand. “It nurtures the high-end, smart film culture and it complements the Angelika very nicely.”

The numbers speak for themselves. The top performing film at the Sunshine is Terrence Malick’s epic drama “The Tree of Life,” which took in $700,000 at the theater in 2012. The Best Picture nominee “Beasts of the Southern Wild” is the second-highest grossing Sunshine film, with just over $500,000, followed by the 2010 Banksy documentary “Exit Through the Gift Shop” at roughly $450,000. This summer, Mike Birbiglia’s ensemble comedy “Don’t Think Twice” generated $350,000 at the Sunshine, while the Viggo Mortensen comedy-drama “Captain Fantastic” took in $169,000.

“It’s a venue where, if you have the right film, you can stay on the screen for eight or ten weeks,” said one independent distributor. “That wouldn’t be possible at the Angelika.”

Bill Thompson, senior vice president of theatrical sales at international arthouse distributor Cohen Media Group, said that despite the fact that the Sunshine’s building has failed to lure a buyer, the chances of the theater sticking around for long are slim. “I think everyone is expecting that the building itself is going to end up becoming a high rise,” he said.

Cohen Media is itself bringing additional screens to the downtown area. The company bought Greenwich Village’s dilapidated Quad Cinema in 2014 and is currently renovating the movie house, with plans to re-open in the spring of 2017. Cohen is branding the Quad, located just over a mile away from the Sunshine, as “the New York City home of classic, foreign, art-house and independent films.” Thompson said that a reduction in the number of screens in New York City is always a setback for indie film culture, but that mediocre films are likely to suffer more than quality titles. “If it’s a good film, I think it’s always going to find a home,” he said.

New York City has also bucked the national trend of independent movie theaters closing for business this year. The opening of the two-screen Metrograph in March brought classic films and new releases to the Lower East Side, as did Brooklyn’s seven-screen Alamo Drafthouse in October.

If the Sunshine does end up leaving Houston Street, it won’t be the end of Landmark Theaters in New York City. The company is planning to open a flashy eight-screen cinema, event space and private bar on 57th street between 11th and 12th Avenues, an area that has seen a significant amount of residential development in recent years.

Magnolia Pictures Head of Distribution Neal Block told IndieWire in an earlier interview that the new Landmark venue will fill a crucial void for filmgoers who live uptown. “The Upper West Side is still under-screened, and films frequently come off screen when they’re still grossing,” Block said. “This will help alleviate that crush.” 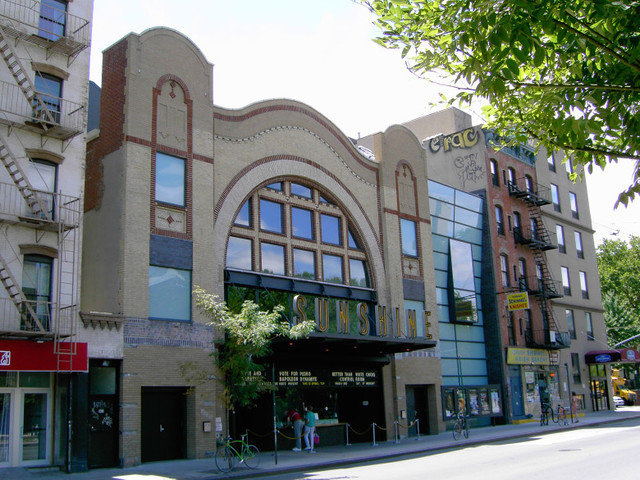 fun fact:on the way to the Chelsea to see die hard with a. vengeance… I stopped in and bought fireworks in here back in 1995…pre-pre Houston street/LES gentrification. at that point it was a storage warehouse/hardware store.

I am going to miss this place though,I have seen quite a few films here going back over the years. I bought tons of dvd’s here too…as the box office used to sell dvd’s at a point. Sadly there is a lot of competition from other indie houses…the Angelika and Film Forum are a stones throw up West Houston. The Cinema Village and Quad Cinema and new Metrograph are all in walking distance.

people had been talking about the approaching demise of the Ziegfeld countless years before it actually happened. so i bet it will be the same with this theater.

also i would hardly call the Cinema Village and
the Quad without “walking distance” of the
Sunshine.

just out out curiosity what do you consider
“walking distance”?