Canon City, CO - Show must go on: Historic Skyline Theater has been pleasing audiences since 1916 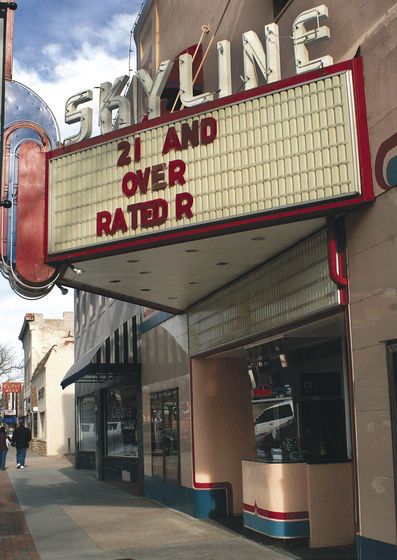 From The Pueblo Chieftain: From Davy Crockett’s “Old Betsy” to temporary closures and war taxes, the historic Skyline Theater has withstood a roller coaster of ups and downs in its 100-year history.

In September 1917, L.A. Jones, proprietor of the Busy Corner Store announced that he intended to build a state-of-the-art theater in downtown Canon City, the likes of which would cost an estimated $20,000 investment, according to newspaper accounts of the time.

By December that year, the Canon City Daily Record was touting the soon-to-be-completed theater as a “new, modern moving picture theater” on which “a great deal of money is being spent to make this the finest cinema theater in any small town in the west.”

It was a big deal for Canon City. After all, neighboring Florence had already opened its Photoplay Theater on Aug. 6, 1916, under the auspices of B.P. McCormick and his wife Anna, a couple who would ironically take over the Jones theater later.

On April 23, 1918, Jones and his son Jesse opened the much-anticipated theater at 606 Main St. It ended up costing them a $40,000 investment, according to the Canon City Cannon.

The first silent movie to be screened at the Jones Theater was Clara Kimball Young’s “The House of Glass.” Children paid 9 cents for a movie ticket, of which 1 cent went to the World War I tax, and adults paid 13 cents, of which 2 cents went to the war tax, according to an article in the Cannon.

About 2,000 patrons flocked to the 1,000-seat theater, selling out two evening shows on opening night. The audience was dazzled by two Simplex moving picture machines that enabled management to “run continuous pictures with no stopping whatsoever between reels,” according to a Daily Record article. By 1920 the Jones was updated with a new “Velvet Gold Fiber” picture screen and also was the site for organ concerts and Vaudeville shows.

A huge “flasher” electric light sign made headlines in 1921 as “The newest thing known in electric advertising. It is the only one of its kind in Canon City and has more than 200 lights,” an article read.

McCormick would take over running the theater in 1925.

“If Mack keeps up his present pace as a theatrical manager, he is assured of a personal popularity as well as a generous patronage from the movie fans of the community,” the Daily Record reported.

Talkies were introduced in 1929 at the Jones with the screening of the film “In Old Arizona.”

An unofficial vote held May 13, 1933, drew the city’s biggest ever voter turnout. The issue: Should theaters be able to screen movies on Sunday?

The “Young People’s Society” adopted a resolution just prior to the vote, urging voters to turn down the Sunday screenings.

“We can see no need for and are not in favor of the opening of the movie picture theaters in Canon City on Sunday for commercial purposes. Some of us are not old enough to vote, but we urge the voters of this community to protect the Lord’s Day against the intrusion of commercialism,” the society’s resolution read.

A total of 1,589 voters cast ballots. By a margin of 225 ballots, the theater remained open on Sundays

It is unclear exactly when it happened, but McCormick changed the name of the movie house to the Skyline Theater and also opened the Sunset Drive-In at the east end of town. His sons Harold and George helped run the theaters as well as McCormick Theaters in Truth or Consequences and Las Cruces, N.M.

An annual event was the free Christmas movie the theater and Elks sponsored for local children. Another The commission was credited with bringing millions of dollars to Colorado via show business, according to a newspaper report.

A highlight at the Skyline on July 22, 1955, was the display of Davey Crockett’s authentic 1812 42-inch barreled “Old Besty” rifle. At the time, it was insured for $1,000 and was displayed until the Walt Disney movie “Davey Crockett, King of the Wild Frontier” closed.

“A letter from the bank proclaims the weapon a phenomenal crowd-drawing devise. It is hoped the rifle will be purchased for the Walt Disney Davey Crockett museum planned for Disneyland in Los Angeles,” a Daily Record article read.

By 1976, the McCormick family turned over ownership of the theater to Commonwealth Theaters of Denver. In 1989 the Skyline closed due to poor attendance: everyone was catching a movie at the twin theaters at Craddock Plaza.

Chuck and Marianne James, owners of Pueblo’s drive-in movie theater and who are devoted to resurrecting things of the past, leased and reopened the Skyline in 1993 when the economy was back on the upswing — a boon attributed to the construction of the new federal prison complex south of Florence. It was a homecoming for Chuck James, who had managed the theater from 1981 to 1985, and Marianne James, who grew up in Canon City.

The couple gave the theater an extensive remodeling in 2001, when they purchased the theater from McCormick.

The theater has been in the late Kate and Roy Voss family since 2004. Kate Voss' daughters Linda Epperson and Karen Nothdurft own the Skyline, as well as the Four Mile Cinemas on the east end of town.

As a testament to the theater’s importance to the community, residents donated $45,000 to help the theater afford a mandatory digital conversion in 2013 rather than see the beloved movie house shut down. The first movie screened after the digital conversion on Dec. 2, 2013, was “The Hunger Games Catching Fire.”

The Skyline continues to screen major motion pictures and is introducing a whole new generation of Canon City residents to the magic of movies.free screening was offered at the theater on Nov. 26, 1952, and featured the CBS Television show Edward R. Murrow’s “You See it Now,” which chronicled Canon City’s effort to prepare for an historic visit from President Harry Truman.

Harold McCormick, who would go on to serve two decades in the state Legislature, created the Colorado Motion Picture and Television Commission, the first of its kind in the nation. Karol Smith, a well-known local photographer and the Skyline Theater’s manager during the 1950s, was the first chairman of the commission. 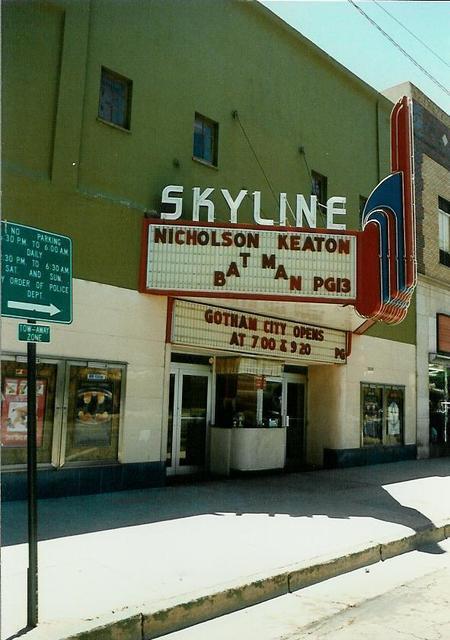 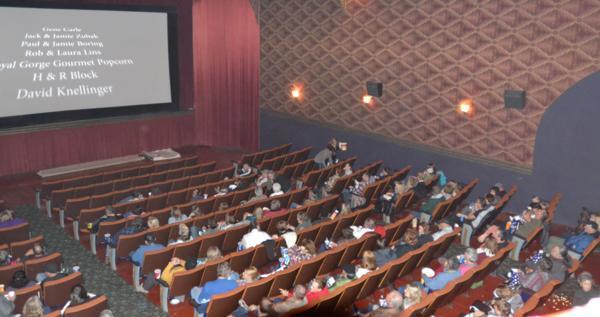