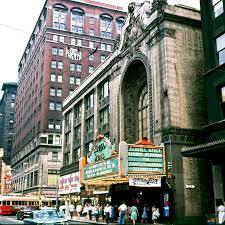 From the Post-Gazette: Three 18-wheeler tractor-trailer trucks pulled into the Strip District in October, carrying the weight of the history of commercial movie theaters in America — a history that began in Pittsburgh in 1905.

The Theatre Historical Society of America that was founded in 1969 to celebrate and document America’s movie theaters had outgrown its home in the circa-1924 York Theatre — now a multiplex — in a suburb of Chicago. In 2009, the society had to take on additional storage space for an archive that is now 100,000 items and growing.

The society waited until the archive was settled into its new home, the ninth floor of the Heinz History Center’s Museum Conservation Center at 1221 Penn Ave., Strip District, before making an official announcement. Proposals from 38 cities were considered before deciding on Pittsburgh, where for now the archive remains as the nation’s largest research and preservation resources for items pertaining to movie theaters and their social and historical significance.

Looking ahead, there may be showcases for the public to see some of the society’s treasures. There have been talks about partnering on exhibitions here, “but ultimately the bigger goal is to have some exhibition space or maybe even a larger facility with an operational theater where we are displaying materials and there is educational programming,” executive director Richard Fosbrink said, one of three staff members who moved here with the archive. His hope is to eventually fill out the staff to five.

The search for a new home had been centered in the Chicago area until Mr. Fosbrink came onboard and said, “If we have to move everything anyway, why not expand the search?”

Pittsburgh first sold itself when society members came here in 2014 for their annual theater tour of an American city, with the Downtown theaters of the Benedum Center, Heinz Hall and Byham as well as the Palace Theatre in Greensburg among their stops.

Mr. Fosbrink, a Connellsville native who attended Seton Hill University and taught at Central Catholic High School, was speaking with Pittsburgh Cultural Trust leader Kevin McMahon while preparing the tour and mentioned that the society was in need of new digs.

“You should move to Pittsburgh,” Mr. McMahon said.

The city became a finalist, along with proposals from Detroit, Cleveland, Chicago and Minneapolis, but Pittsburgh’s deep connections to the creation of the film industry held undeniable allure.

Besides that first-of-its-kind nickelodeon, introduced on Smithfield Street in 1905, Mr. Fosbrink mentioned the Warner brothers’ Pittsburgh-based Duquesne Amusement and Supply Co., well before there was a Warner Bros.; the local partners in Metro Pictures, a forerunner of MGM; film industry pioneer Edwin S. Porter, born in Mr. Fosbrink’s hometown; David O. Selznick, the producer of “Gone With the Wind” in 1939, born in Pittsburgh in 1902 …

“No other city could offer that kind of history,” the society’s director said.

The final decision was made after talks with the Trust, the University of Pittsburgh, which houses the Curtis Theatre Collection — 1,300 volumes on live theater and theaters — and the Heinz History Center. The latter offered a floor of LEED Gold-certified archival storage space that could be leased immediately.

Betty Arenth, senior vice president of the Heinz History Center, said in a statement that the space, “features state-of-the-art security and storage conditions that help preserve collections for future generations.”

Before the Internet, the society grew to include a clipping service and additional collections were added to Mr. Hall’s.

The society also publishes the magazine Marquee four times a year, which is distributed to members and educational institutions, and administers a fellowship and award aimed at continued research and preservation of theater history. The online catalog and other information are available at historictheatres.org.

An example of the archive at work was its use in the recent $94 million restoration of the Loew’s Kings in Brooklyn, N.Y., documented in the society’s book, “Kings Theatre: The Rise, Fall and Rebirth of Brooklyn’s Wonder Theatre” — a reminder of the single-screen movie palaces of yesteryear.

Today, we live in a world of multiplexes and creating experiences that will draw people into theaters and away from their large-screen TVs at home.

Mr. Fosbrink said the archives are keeping up with the times.

“We say history started yesterday,” he said. “As much as we look at places like the Loew’s Kings or the Benedum Center and we need to restore them as historic theaters, we need to be documenting things happening now, because that will be history at some point, too.”

It’s great that the THS collection is in a purpose-renovated building which can offer a safe repository for archives and which has a downtown location. For many years the collection was housed in unsafe and insecure out-of-the way locations.