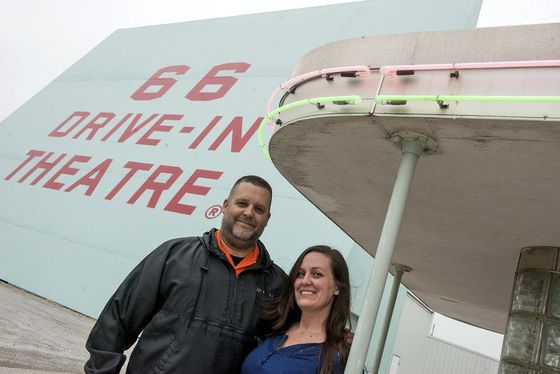 From The Joplin Globe: When the 66 Drive-In Theatre — one of the few today with roots on the route — opens Friday, it will be in the care of new owners for the first time in more than three decades.

Tourists who today come from around the world to experience America’s Route 66 history are joined at the theater by locals, many of whom have early memories of the drive-ins that once dotted the region.

As a girl, Amanda Pearish-Rinehart spent weekends going to drive-in theaters with her family, and she said supporting the Carthage theater seems like the right thing to do.

“I spend about half of what I spend to take them to a regular theater, and we have a much better time,” she said.

Nathan McDonald didn’t grow up around drive-in theaters, but he said they got into his bloodstream during his 10 years of working at the 66 Drive-In as a security guard.

“I just grew to love it,” he said. “The venue, the atmosphere, the people — it’s just one of those really unique experiences.”

When the owners of the theater decided to sell, McDonald was ready to buy.

Set on a spacious, tree-lined lot just off Route 66, the theater is a shrine to America’s car culture. It was built in 1949 and retains much of its original character.

Glenda Pike, a longtime member of the Missouri Route 66 Association, said the theater is a major landmark for tourists who trace Route 66 from Chicago to Los Angeles. It is the oldest and most intact historic drive-in theater located directly on Route 66 in Missouri, and one of only a handful that operate on Route 66 anywhere in the United States, according to documents filed with the National Park Service in 2003, when it was listed on the National Register of Historic Places.

“People come to see that drive-in from all over the world,” she said. “It’s listed in all kinds of Route 66 information books."

Route 66, known as America’s Main Street, is today a major international attraction for tourists from Europe and Asia who come to immerse themselves in American history and culture, and historians say drive-ins are a way to do both. Some tourists ship vintage cars across oceans to drive on Route 66.

Pike has fond memories of seeing “Cars,” a 2006 animated movie that featured talking vehicles, at the drive-in with a group of Norwegians. The movie takes place in the fictional Route 66 town of Radiator Springs, which was once a popular destination until it was bypassed by Interstate 40.

It wasn’t long ago that American culture began leaving drive-ins in the rearview mirror. The Carthage theater closed in the mid-1980s, seemingly relegated to the dust pile of history along with other area drive-ins.

Mark Goodman, a salvage yard operator, bought the property, and old cars and tires filled the lot where moviegoers had once parked their vehicles.

It wasn’t obsolete for long. Barely a decade later, tourists from foreign countries began asking Goodman about the drive-in. He decided to restore the theater, including the neon sign with the enormous red “66” on the back of the screen.

Today, the property contains four historic structures that combine to give visitors a sensation of time travel. A concession stand, a ticket booth, a screen house, a playground, and parking spaces all date to 1949. The buildings’ curved lines and smooth surfaces recall the post-World War II years in the United States, when drive-in theaters came into vogue.

“It’s one of the last few drive-ins on Route 66,” said Patrick Tuttle, director of the Joplin Convention and Visitors Bureau. “The internationals love the Americana feel of it. You just can’t get it everywhere.”

In 1997, as Goodman and his partner worked long shifts returning the drive-in to its 1949 state, news of the project touched a nerve in Carthage, too. Callers, many of whom had early memories of watching movies at the theater, swamped phone lines at the Carthage chamber.

“When it closed down in ‘85 we were really kind of bummed out,” Becky Wagner, then a 24-year Carthage resident, told the Globe at the time. “I’m just glad it’s coming back. Everybody lives in a fast-paced world now, and it’s a good place to go and relax.”

Twenty years have passed since the restoration, but McDonald said the 48-by-95-foot screen and other buildings are still “pristine.” Besides basic upkeep, he plans to focus his energy on expanding the theater’s schedule. He will stay open from Thursday to Sunday, one night more than in previous years, and will extend the season by more than a month into mid-October.

For McDonald’s children, who at 8, 9 and 11 years old have never known life without the drive-in, opening night won’t be a novelty. It is a natural sign of spring. The features this weekend are “Kong: Skull Island” and “The Lego Batman Movie.”

“In the summertime, we’d go to the drive-in,” McDonald said. “We had our parking spot up near the front, and we sat in the back of the truck. They’re as vested in it as I am.”

‘That love affair with the automobile also spurred the creation of many new types of businesses, which were related to its use. Entrepreneurs across the nation found ways to cash in on the now-ubiquitous car. One such person was Richard M. Hollingshead, Jr., who invented the drive-in theater. As one history of the business put it, “In the early 1930s, Hollingshead began experimenting with showing movies out of doors. By setting up a projector on his automobile hood and aiming it at his garage, he ingeniously combined two of the things that people were most reluctant to give up during the Depression: cars and movies.”’ 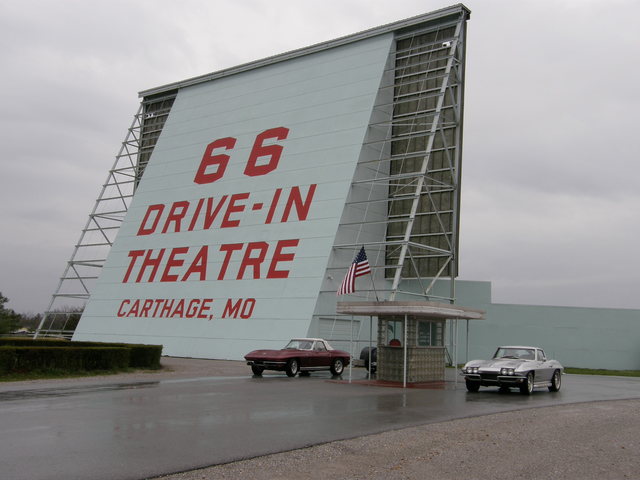