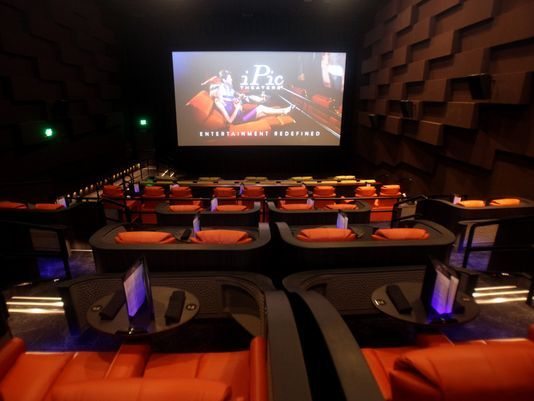 From LoHud.com: Those looking to elevate the traditional dinner and a movie date night will soon have a new option.

An eight-screen, 580-seat iPic Theater that combines a luxurious film-watching experience with high-end food and drinks is set to open May 5 in the still-under-construction $150 million Rivertowns Square development.

Upscale theaters featuring restaurants and, in many cases, seat-side food service, are a growing trend across the country; Florida-based iPic Entertainment operates 15 other cinemas in 10 states. Studio Movie Grill, AMC Dine-In and Alamo Drafthouse, which opened a Yonkers location in 2013, are among those offering similar amenities.

“It’s a great area and there’s a need here,” he said. “Dobbs Ferry doesn’t have any theaters, and there really aren’t a lot of theaters in the entire county. The officials in Dobbs Ferry have been great to us, and we’re really excited about opening here.”

The idea, he said, is to create a buzz about a night at the movies.

You don’t have to get dressed up to go to an iPic Theater, but you might feel like you want to. When you walk into the Dobbs Ferry location, it feels more like a fancy hotel than a movie theater. There are no pinball machines, candy kiosks or rope-line snack counters to be found. Missing, too, are old movie stills or posters touting coming attractions. Instead, the walls and hallways look like galleries, with murals and works of art — some created by local artists and some flown in especially for the new theater.

You can choose to have food delivered to your seat, depending on which ticket you choose, or eat before or after the movie at the 4,600-square-foot City Perch Kitchen + Bar. The menu has unique dishes, many made from locally produced ingredients. The full service bar will offer a variety of wine, beer and cocktail choices. Because it serves restaurant food and has a table for every seat, state law allows iPic to serve alcohol.

Each theater is split into two sections — Premium and Premium Plus. Premium patrons pay $19 for their seat and can bring in food, snacks and drinks from the iPic Express service counter on their way in. These leather chairs are oversized with plenty of cushion and legroom.

Premium Plus patrons pay $27 for their seat and can order food with the push of a button which is delivered by stealthy “iPic ninjas,” as they call them. Premium Plus seats recline and come with a blanket and pillow, along with a cubbyhole to stash your bags and shoes in. Unlimited servings of popcorn for these seats are free.

All seats can be reserved ahead of time online or via the iPic app. You can even order your food in advance.

The theaters are equipped with state-of-the-art Dolby sound digital projectors and every seat offers an unobstructed view of the screen.

“You’ll never see a bad movie,” Hashemi joked. “If you don’t like what’s on the screen, you’ll fall asleep.”

iPic will show first-run movies — first week blockbusters include Guardians of the Galaxy 2, The Circle, Fate of the Furious and Boss Baby. iPic also has an exclusive contract with Netflix to screen launches of its original programming. There will be two or three new movies every week.

Chef Sherry Yard, chief operating officer of iPic’s restaurant division, has developed an ever-changing “Dining in the Dark'” menu that she describes as “not too messy, not too smelly and not too noisy.”

Yard, winner of three James Beard Awards for culinary excellence and author of “The Secrets of Baking: Simple Techniques for Sophisticated Desserts,” said the food does not require the use of utensils.

The Dobbs Ferry menu has not been finalized, but could include things such as lobster rolls, paninis, sliders, pizzas, cheesecake brulee, smores and different varieties of popcorn. Yard said the menu will change four times a year and specials will be offered.

Hashemi, who’s been building theaters for more than 30 years, said he began thinking about the iPic concept when his children got older and no longer needed to be accompanied by an adult to see a film.

“I’ve always looked for ways to improve the experience,” he said. “Dining out and going to the movies are the two most popular forms of entertainment, so why not bring them together under one roof?”

The new theater will employee 250 people. iPic offers a variety of pricing, special offers and membership plans which can be found at www.ipictheaters.com.

Hashemi said the iPics in New York and New Jersey have been “great successes” and predicted the same for Dobbs Ferry.

This is without doubt one of the best theaters that I’ve ever come across to be honest. The theater is almost as classy as australian writing. I just want to visit it so bad now!