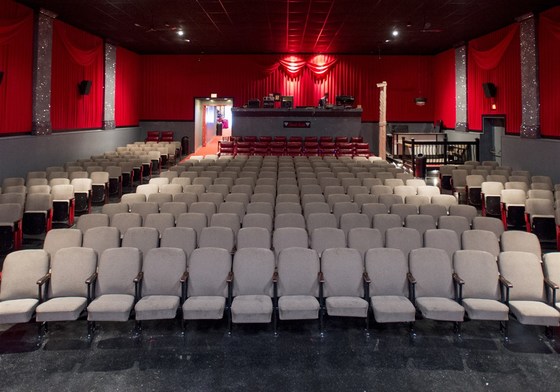 From The Pittsburgh Post-Gazette: Small-town America may have been knocked down in recent decades, but don’t count it out. Private and public efforts have begun to breathe new life into abandoned main streets as people look for amenities closer to home.

One trend has been the restoration of historic theaters across the region.

“Western Pennsylvania has some really good examples of people who have pulled together to do something for their communities,” said Rick Fosbrink, executive director of the Theatre Historical Society of America, which recently moved to Pittsburgh from Chicago.

“Enough money was raised for the restoration of the Strand Theater in Zelienople to turn the auditorium in a different direction, allowing for the future addition of a stage house wing,” he said. “The community rallied together to save the Casino Theatre in Vandergrift, which was a stop on the vaudeville circuit. The Westmoreland Cultural Trust is doing a phenomenal job of programming for their audience at Greensburg’s Palace Theatre, some of whom come from as far as Pittsburgh and Uniontown.”

The Lamp Theatre was built as a movie theater in Irwin, where Mr. Fosbrink grew up. “One time I went to see a movie and the rain was coming in. In recent years, citizens raised money and completely redid the space, extending it to live performance,” he said. “Now they’re trying to raise money to bring Ritter’s Diner, which is parked at Station Square, to the Lamp.”

Leigh Ann Rice-McCulty has made the Diamond Theatre of Ligonier a personal mission. When the Ligonier Theatre on the town’s Main Street was put up for sale last year, she and her husband, Matthew McCulty, decided to buy it.

The West Virginia natives moved to Laughlintown after attending West Virginia University and, as their children grew, they enjoyed participating in theatrical productions at the Ligonier Theatre. Mrs. Rice-McCulty wanted to ensure that their children — Lanigan, 12; Arison, 9; and Mariana, 4— would be able to continue to learn from such experiences, along with other local children.

“We were worried that it would be turned into a restaurant or antique store and that we’d lose the theater,” she said.

The building opened in 1920 as a Ford garage and was turned into a movie theater in 1939. With new paint, carpeting, draperies, electronic reclining chairs and a laser 4K projector, the theater launched with a children’s play in January. The first movie was screened this month.

Mrs. Rice-McCulty said Ligonier residents have told her, “We’re so excited we can walk to the movie.” (For upcoming events: www.diamondtheatre.com.)

In Latrobe, a nonprofit organization, Faith Forward Inc., that had been renting space in Mozart Hall on Main Street is now the owner. Dawn Hennessey, executive director and founder, allows that the building “needs a lot of work, but it has so much historical value that it would be a shame if it was lost to the community.”

The landmark building was “built in 1890 by George Seiler, whose parents were German immigrants, and made to look like the grand opera houses in Germany,” said Mary Lou Townsend, president of the Latrobe Area Historical Society. “The onion dome turrets are what make the building distinctive.”

“From the beginning, it was used for both business and culture. There were two stores on the first floor. The second floor was a large hall with a stage where concerts, musicals and operettas were presented.”

In the early 1900s, Ms. Townsend said, Mozart Hall began to lose patrons to another Latrobe theater that drew bigger crowds and was closer to the railroad station. The hall served in various capacities until 1960 and then fell into disuse. In 1980, new owners began restoration but found it too expensive to maintain.

Jarod Trunzo, executive director of the Latrobe Community Revitalization Program, was instrumental in securing a $15,000 grant from the Community Foundation of Westmoreland County to begin restoration now.

“The building was at risk,” he said, and the first phase of a multi-year project will be exterior work in the back and then on the front of the street-level storefront spaces to ensure that the building is structurally sound.

Future phases will restore the cast iron facade, including the part covered up in the 1980s, and add replicas of the original awnings.

“I think more than ever,” Mr. Trunzo said, “as big box retail stores are going under, people want to preserve local experiences. That sense of place, that sense of history, you’ll never find at strip malls and urban malls. There’s a big national return to historic preservation.”

Service to community is a large part of Ms. Hennessey’s plan. She is exploring the possibility of renting one of the storefronts to a restaurateur, opening a casual coffee shop “where people can come and hang out” in another area, and making the ballroom available to community groups for their events.

Eventually she would like to expand her organization’s Angel Arms program, which aids infants born addicted to drugs and their parents, into the hall’s third floor. That space, she has been told, was historically where actors and actresses stayed while performing at the hall.

Mr. Fosbrink credits multiple factors for the interest in revitalization. “One is theater people looking for innovative places to use. Historic presevationists are another subset. It’s really great when those two divergent paths come together.”

Another driver is that “we’re kind of at a critical place in time to reclaim or repurpose [historic] buildings. If it’s not done soon, if we wait another decade, we won’t be able to save them,” he said.

“I think we’ll see more and more main streets coming back into prominence and being more important. Millennials want neighborhoods, a sense of community. They don’t want to have to rely on having a car for groceries, entertainment. Saving theaters is a good example of that.”

Mr. Fosbrink said this region “does care a lot about arts and culture and therefore we pay attention to it. We love our area and we want to take care of it.”