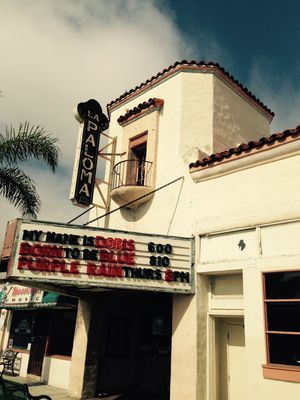 From the Seaside Courier: Silent film star Mary Pickford supposedly rode a bicycle to its opening in 1928, and Douglas Fairbanks and Charlie Chaplin attended its initial screenings — right after the dawn of “talkies.” Later, surf films took top billing because of the surf culture in the area.

The La Paloma Theatre, a Spanish revival-style venue in Encinitas, is a historical landmark to many in the city, and downtown business leaders are looking to get it designated as such, either through the National Register of Historic Places and/or the California Register of Historic Resources.The Encinitas 101 MainStreet Association and consulting company Dudek have donated employee time to lay the groundwork, association president Dave Peck told the Encinitas City Council April 27.“The one thing that people don’t disagree about in this town — and it’s a town where we disagree about things, sometimes in a vitriolic way — is that La Paloma needs to be preserved as an icon, as a landmark, as a beacon in our downtown,” he said.

By looking up at the ceiling of the old theater, “you can see what it once was,” he said, and that it needs significant cosmetic improvements.

The owners, a family in Santa Monica, are open to restoration, though the project needs “seven figures” and the owners are willing to offer a “much smaller pledge,” he said. The effort would need leadership from the city, and perhaps a public-private partnership or philanthropic benefactors, he suggested.“It’s undeniable that the city wants to be a stakeholder in this process,” said Encinitas Mayor Kristin Gaspar. “It’s an asset that needs protecting.”Historic designation is the best way to attain “legal protections,” Peck said.Operator Allen Largent said he has worked at the theater off and on since 1979 and bought the business, which leases the theater, in 1992. “Not a week goes by when a customer doesn’t ask me, ‘What’s going on with this place? What about restoration? Can we do crowdsourcing? I hope it never goes away,’” he said. Since the meeting, Encinitas 101 has had multiple calls expressing interest in the project and asking how to contribute, said executive director Thora Guthrie. 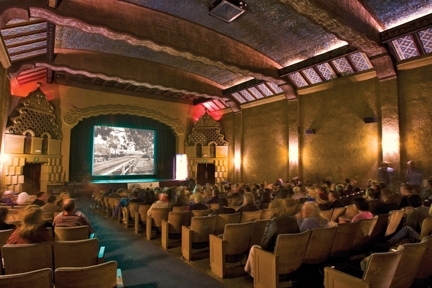