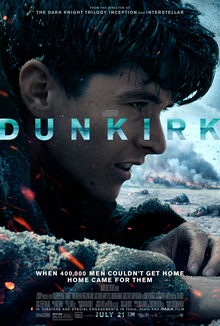 From The Verge: Director Christopher Nolan has made no secret of his preference for film over digital capture and projection, but his latest project Dunkirk is going to represent something of a high-water mark. According to Variety, the World War II drama will be projected on 70mm film in 125 theaters, topping the 100 theaters that showed Quentin Tarantino’s The Hateful Eight back in 2015. That makes it the widest 70mm release in 25 years.

The film, which chronicles the evacuation of Allied soldiers from Dunkirk, France, represents Nolan’s most ambitious use of film formats to date. While he’s utilized IMAX film cameras for sequences in films like The Dark Knight and Interstellar, with Dunkirk Nolan shot the entire film on a combination of IMAX 65mm and traditional 65mm film. The latter format has seen a bit of a mini-renaissance lately, with Paul Thomas Anderson also using it for The Master.

Dunkirk is getting released on. Along with standard 70mm film projection, which offers an ultra-wide 2.20:1 aspect ratio, the movie will also be screening in what’s being referred to as “IMAX 70mm.” That’s basically just the classic, old-school IMAX format, where the film runs through the projector sideways, for an even higher-resolution image and a towering 1.43:1 aspect ratio. In addition to that, it will be projected in IMAX Digital — which depending on your theater can mean several different things.

If your local venue offers IMAX’s new laser-projection system, you’ll be seeing the company’s highest quality digital presentation, with an aspect ratio of either 1.9:1 or 1:43:1, depending on the size of the theater screen (I told you this was going to get complicated). The traditional IMAX Digital presentation, which is the IMAX variant most commonly found in multiplexes, will lack the expanded color gamut and brightness of the laser screenings, and will be at an aspect ratio of 1.9:1. And outside of that, the movie is also being screened in both traditional digital projection and on 35mm film.

Which format is the one, true Dunkirk? Nolan is known for relentlessly checking the quality of his films across the different distribution mediums, but in this case we’re talking about a film that was shot natively on two different 65mm formats. The ultimate expression of Nolan’s vision is no doubt the IMAX 70mm, with the traditional 70mm presentation running right behind. The problem is that IMAX 70mm screens are remarkably hard to find in 2017. Fortunately, Dunkirk’s own ticketing site makes it nice and easy to figure out which of the premium formats is showing where — and tickets are on sale now. The film opens on July 20th.

I have yet to see a good Christopher Nolan film. Can anyone here please suggest one? And no motorcycles sending tractor trailors into the air into balls of fire upon impact films, please.

Momento (2000) was written and directed by Nolan. Surprisingly good. Insomnia (2002) Director, with Al Pacino and Robin Williams. I saw the Dark Knight at the Seattle Cinerama but did not like the film. The theater was fantastic though. If you’re ever in Seattle… I saw the fascinating, dark, end of the world Interstellar (2014) in a large screen IMAX theater with terrific sound BUT the sound effects muddied the dialogue so much that a lot of it was unintelligible. I watched in again on Blu ray with headphones (preferred, or use the English subtitles) at home and was able to hear most of the dialogue.

I agree. The sound mix on bluray is better than the theatrical version. Maybe I’ll wait until dunkirk hits bluray in an r rated director’s cut. 1 hour 47 minutes is too short for a nolan movie.

I read where Nolan purposely made the music loud in Interstellar to immerse you in the movie. I agree it did drown out the volume a bit much.

This will be the first 70mm film to play the New Mission Theatre in San Francisco starting July 21. Will look great on their large screen. First time ever a 70mm movie film has played a old Mission St movie theatre.

For New Jersey moviegoers, in addition to AMC GS16, the AMC’s in hamilton and cherry hill will have 70mm installed for the release of this movie, making it the first time a 70mm will be played in those theatres. Surprisingly, no reserved seating for 70mm in those venues. As for the sound mix, I saw it in digital imax in rockaway and was underwhelmed. He also did this in the batman movies where surround sound and music overlapped the dialogue, unlike the home media releases where it’s fixed.

Thank you Stevej. I did enjoy “MEMENTO”.

“INSOMNIA” not so much. I found “THE DARK KNIGHT”, “INTERSTELLAR”, “INCEPTION” and “THE PRESTIGE” all to be worthless hack jobs, soon to be forgotten.

If he can make a WWII movie any better than that mess, “PEARL HARBOR”, I will be pleasantly surprised.

Could someone explain what this means: Additionally, select theatres will be presenting Dunkirk in IMAX with laser a re-imagination of the movie theatre experience capable of projecting an image with up to a 1.43:1 aspect ratio. I am trying to figure out if I should see the 70mm version or the IMAX version listed.

The New Mission Theatre Dunkirk 70mm film looked nice, crisp and clear with some of the best stereo surround with base in San Francisco. This is the first time in many years so many 70mm film prints are playing around the SF Bay area. Many shows are sold out this weekend. If your in SF CA try to see It at the Drafthouse New Mission Theatre on Mission ST. One of the few cinemas left in the area that has curtains that work.

In Dallas, the Cinemark 17 & IMAX located at 635 & Webb Chapel is the premier presentation of Dunkirk in the city. The presentation was absolutely amazing. Image filled the entire screen for roughly 70% of the film and the sound mix was top notch.

For digital 2k and 4k presentations of the movie the aspect ratio matches that of the 70mm print; the 35mm version is the 2.39:1 version; the imax 2k digital version is the 1.9:1 version with 65mm scenes in 2.20:1 and the intro in 1:1. Trailers for the 70mm prints are Blade Runner 2k49 (scope) and Justice League (flat). Audio is provided by Datasat (F/k/a DTS). I’m surprised that Nolan prefers 5.1 for his movies instead of 6.1 or 7.1 and beyond. The look of his movies when seen on bluray are much better than any other director since it’s more film like and not digital. I saw Power Rangers on bluray and noticed some jarring cinematography. It was shot on Red and looked sharp but there were frames that were skipped. On Nolan’s films, u can see minor splices and jump cuts from regular to imax form. For TDKR, the aspect ratio increases to regular in one scene while in Hunger Games Catching Fire, the screen opens up during the climax.

“Dunkirk” is a good movie. I saw it last year, when it first came out, and was glad that I did. I hate the fact that so many movies nowadays go on DVD and Blu-Ray almost as soon as they come out into the theatres.

Director Christopher Nolan has made no secret of his preference for film over digital capture and projection and the thing impressed me. I really loved the entire description that is clear.

I watched Dunkirk in a iMax theatre and it was amazing. Tree Service Richmond Hill

went to this movie with several friends and it was awesome! shreveport fence

thanks for the article! fence company pensacola florida

An amazing film! Thank you for sharing this! Professional house cleaning

Thank you for sharing this! creative financing

I feel earnestly about this and truly like becoming more acquainted with extra on such a field. Do you mind restoring your blog area with extra plan? It should be truly huge for us in general. Delhi Call Girls Service Escorts in Delhi Delhi Call Girls Call Girl in Delhi/a>

Great info! I recently came across your blog and have been reading along. I thought I would leave my first comment. From Painter Garland TX

Outstanding piece. Thanks for sharing this here. By the way, If you are looking for nondenominational church, please visit my website for more information.