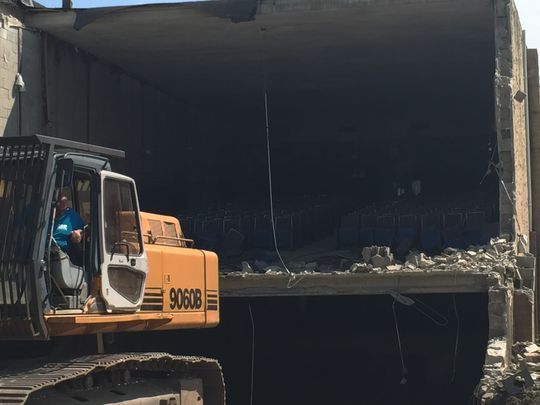 From the Asbury Park Press: The giant steel teeth of an excavator tore the back wall off the old West End movie theater, exposing rows of blue seats as the planned demolition began on Monday morning.

The 1970s-era theater on Ocean Boulevard, which hasn’t shown a movie in nearly 20 years, is being razed for a mixed-used building that will house a synagogue and seven retail storefronts.

Locals remember the theater as a popular hang out for “Indie-style” or independent movies.

“It was a good place to go on a Friday or Saturday night for a few bucks and then go over to the Ink Well for coffee,” said city resident and Long Branch Historical Association member Beth Woolley.

The theater opened on Feb. 15, 1974, with a showing of “Crazy Joe,” starring Peter Boyle and Walt Disney’s “Fantasia.”

The theater was called “The Movies I and II” and was a twin complex that could show two movies and sit 650 people. The Music Makers Theatre chain eventually acquired it.

Two vacant adjacent structures to the theater that were most recently occupied by a bagel shop, a uniform clothing store and an Italian restaurant will also be demolished — but at a later date. An unoccupied two-story apartment building behind the theater is also expected to be knocked down in the future.

“The theater is being demolished (Monday). At this point that is the only building that has been issued a demolition permit,” said Kevin B. Hayes, the city’s acting business administrator.

A video of the theater’s demolition can be seen above.

Chabad of the Shore, a nonprofit religious institution at 620 Ocean Ave., owns the buildings.

The Chabad of the Shore’s site plan was approved by the borough’s Planning Board last October, after initially being denied by the Zoning Board in 2013.

That rejection was made on the basis that religious uses were not permitted in the city’s West End, a neighborhood of small businesses and residences a block from the beach.

The Chabad group filed a religious discrimination lawsuit and then dropped it when the city drew up the West End Design Overlay, which among several new uses, permitted religious institutions as a conditional use.

The group is building the synagogue in neoclassical-style masonry. The first floor will be house seven retail storefronts while the second floor will have a sanctuary and open-air patio. There will be classrooms on the third floor.

A parking lot with 94 spaces will be in the rear of the building and can be used by the neighborhood when the Chabad of the Shore is not holding services.

Hayes said the city doesn’t have a start date for construction yet.

“They (Chabad) are waiting for some other required items to receive the demo permits for the remaining buildings. Once the buildings are demolished, they can submit for construction permits for the project,” Hayes said. 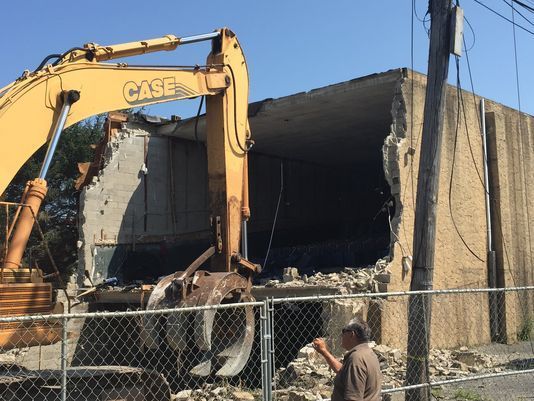 I can see lots of cables and electrical wirings lying around the site, do they have commercial electricians noosa to make sure everything has been disconnected and not harm anybody?

Post was nice. I also read about the Target promo codes That always work and gathered a lot of knowledge.

Thank you for sharing this! We offer hard money loans for flipping houses

Thanks for this! We have funding assistance for you.

We are a local seo service virginia beach

When this happened, it made my heart sad. That theatre brought so many memories. workers comp lawyer