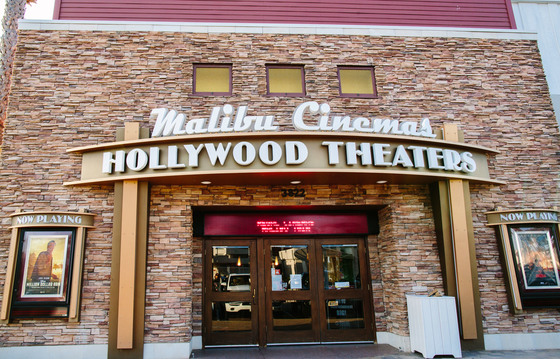 From the Malibu Surfside News: All good things must come to an end.

The Regal Malibu Twin Theater played its last show Sunday, Sept. 10, saddening many and causing some to reflect on how important the theater had been to their families over the years.

The theater opened in 1972 as a single screen cinema. Hollywood Theaters reopened it as a twin movie house following renovations in November 2006, according to cinematreasures.org/theaters. In 2013, it was taken over by the Regal Entertainment Group whose favorable lease expired at the end of 2016. Since then, the theater has been on a month-to-month lease and its vitality has been in peril.

“I feel very sad about it closing,” Stella Allan said. “I’ve been coming here for more than 20 years. It’s nice to have a local theater to come to. It will definitely be missed.”

Some locals made sure to see the theater out, taking in the very last movie, reminiscing about old times and noting how its loss diminished the sense of community.

“We came to pay homage to the theater,” David Olan said. “We have a lot of good memories of the theater. I used to bring my son here. We saw Star Wars two weekends in a row. It’s sad to lose it. It was one of the simple things in life.”

Others remembered special moments at the theater.

“I saw my first 3-D movie at this theater,” Mary Russyniak recalled.

“I am sorry to see such a tradition leave Malibu,” he said. “We’re losing so many traditions and the millennials are missing out on socializing instead of always being on 2-inch screens.”

The economic repercussions of the theater closing concerned some.

“I feel so sad about this,” Candace Brown said. “I hope all of the employees have jobs.”

In an internet age of Netflix, Hulu and similar platforms, many movie theaters are threatened.

“It’s sad to see the theater go,” said Barbara Bruderlin, president of the Malibu Chamber of Commerce. “I enjoyed going to the movies and eating popcorn. The Chamber wants to thank the theater for all the years it had here in Malibu and to wish everyone at the theater the best in whatever endeavors they pursue next.”

Like many a movie that played in the theater over the years, this story did not end as many would have liked.

It is unclear what the property manager Jamestown has in store for the space.

What is clear is that for all who came to see the theater’s last performance, as the credits rolled for the last time, the end of an era happened in Malibu.

“I am sorry to see such a tradition leave Malibu,” he said. “We’re losing so many traditions and the millennials are missing out on socializing instead of always being on 2-inch screens.”