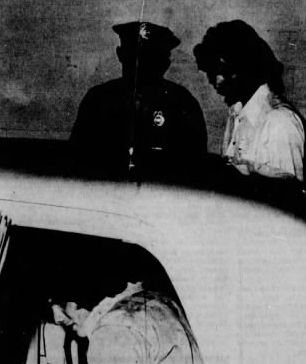 On October 10, 1975, 2 State Fair Twin employees, 26-year-old Otis Joseph Land of 2437 West Third, and 18-year-old Ronald Lee Dollinger of Western View Estates (Who Recently Received New Management That July. “Kids These Days…”) were arrested by the Sedalia Police Department and charged with allowing and showing obscene material and violation of the city’s p****graphy ordinance, which at the time were screening its third out of a 3-day run of the “Double” X-rated film “Towers Of Love” and “Young Swingers” at Screen #2 (with Screen #1 was showing “Bite The Bullet” at the time).

This is not the first time it happened. The last time at the time a local controversy over the city’s p****graphy ordinance is the same exact theater on August 14, 1974 when “The Devil And Miss Jones” was scheduled to run there for a single evening at Screen 1 (while Screen 2 picked up “99 And 44/100% Dead”), but the film never arrived until the following morning. This incident was during the Fox Theatre’s one-week run of the smash “The Exorcist”. The city’s attorney Robert Lison refused to see the film due to the film didn’t arrived on time (due to transportation “fouled-up”).

The manager said the following: “I haven’t had an X out there for a long time. I run a G and I just sit here and die. I’ve run several free kids shows and nobody ever comments on that. With the fair (Missouri State Fair) coming, I am running an X for a reason. 90% of the people I have here Wednesday are Fair people. I lost 4,000-5,000 during the Ozark Music Festival just been closed down. They won’t come in for a G! I’ve got to recoup somehow.”