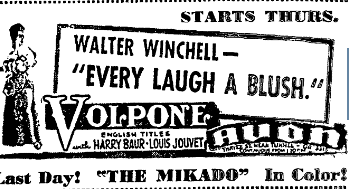 In June, 1948 the Providence Police had banned the 1941 French film Volpone by Maurice Tourneur, as “indecent and irreligious.” It was scheduled to be shown at the Avon. It had also been condemned by the Catholic Legion of Decency (CLOD).