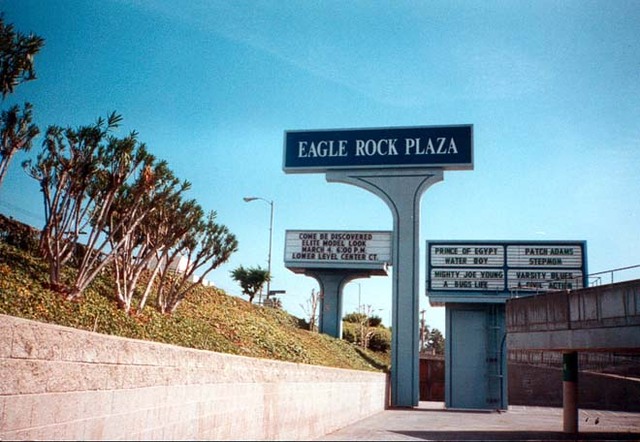 The Eagle Rock Plaza Theatre, that was located on the second floor next to Wards (Now Target), was owned and operated by Pacific Theatres since 1973. It became second-run in the fall of 1996, and was closed in September, 1998. An Independent theatre operator took over the theatre around January, 1999 after the theatre was newly remodeled and closed down for about a few months and lasted until November, 2001. I remember seeing a lot of movies there such as “Short Circuit 1 & 2”, “The War of the Roses”, “Good Burger” and many others. They basically played movies on 4 screens whenever the Glendale area isn’t playing there. It was a good theatre that lasted for 28 years. I still missed it from this day.

Boy, how I remember those shoebox shaped theatres there. I remember how big of a thing it was when the Eagle Rock Plaza, and its theatres, opened since it was the first mall and multiplex in the Glendale area. I remember seeing Rocky and Jaws 2 there (among other films) and how easy it was to just from one theatre to another to see movies, and not get caught.

Joseph, The theater was not on the second floor, it was on the first floor. I worked there when Phantasm showed in 1979! In early 1979, someone walked off with about $10,000 in cash from the managers office. They were sure it was an inside job but they could never prove who did it. They polygraphed everyone but never solved it.

Yeah it was on the 1st floor I had my 1st kiss there wow weird. Oh and to Joe W the janitor took the money it was an opportunity not planned he happen to see it in the bag with the zipper and everyone knows what a money bag looks like. He didn’t think it was really the money because it was so packed but he looked and there it was. He waited there which I’m sure seemed like 10 years and he no doubt was sweating with a heartbeat he can see through his shirt. For a while he stood there contemplating what to do and thinking someone just might walk in at that moment. He wanted to just take it and run. The manager went to the restroom for a long time apparently. So he finally threw it in the trash with wheels he used while working and rolled it away and proceeded to keep working and look as normal as possible. When the cops got there he already hid it in a safe place but they never even batted an eye his way. Later he went home when it was time then came back at 2 am and got the loot. Cameras were available this is what happens to cheap skate owners and careless managers. Sad but true there are scumbag people everywhere and you’d never know it no matter how good you think you know them. Case: ~SOLVED~

Wasn’t the original Eagle Rock sign different in the 70s/80s? I can’t find ANY vintage pics of the place

This opened on October 3rd, 1973. its grand opening ad can be found in the photo section. It was taken over by Pacific Theatres in 1986 and closed in 2001.

As a movie-crazed kid growing up in Glendale, I felt like I came to the Eagle Rock Plaza theaters at least once a week through the eighties, into the early ‘90s. (The fact that it was walkable from Glendale High School did not hurt.) The theaters themselves were unimpressive, but they stole many of the best first-run movies away from the “better” theaters on Brand Boulevard in Glendale. I distinctly recall that, in the summer of 1982, they had E.T. The Extraterrestrial, Rocky III and Poltergeist running simultaneously. If you went to the theater on a Saturday night, the line would be so long it would snake halfway down the bottom floor of the mall.

It was reopened as “Eagle Rock Plaza 4” on Friday, January 15, 1999, listed on the Independent Theatre Movie Guide from L.A. Times.