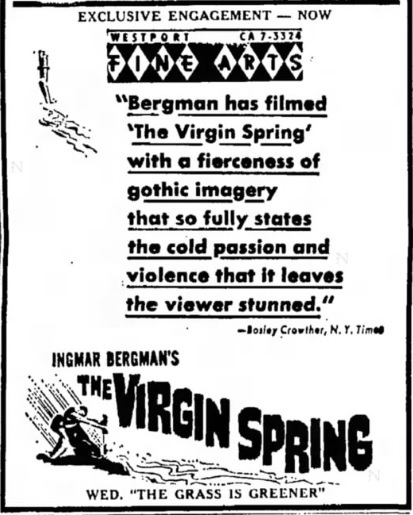 The Fine Arts Theatre was refurbished in 1940, when it was given a new Colonial Revival style facade and a similar style to the interior, designed by Boston MA based architectural firm Krokyn & Browne. Seating was provided for 712, all on a single level.

There were other Fine Arts Theaters in CT, like Brookfield, more in Westport and in Shelton. Was this a local, regional chain?

This theatre is now a Restoration Hardware store.

There were four theatres in Westport, all last operated by Loews. The Fine Arts 1&2, listed here, was an old single-screen moviehouse. Behind it, on Jesup Rd., was the Fine Arts 3. A bit further up the Post Road was the Fine Arts 4, and the Post Cinema was a mile further east on the Post Rd. The FA3, FA4, and Post Cinema have all been converted to retail. In the 70’s, they were part of the Nutmeg Circuit, which merged with Carroll’s Cinemas of Syracuse, NY, to form CinemaNational. In 1987, USA Cinemas bought CinemaNational, and in 1988, Loews bought USA. Also part of this chain in Southwestern CT were the Wilton Cinema in Wilton (now part of a TJ Maxx), the Greenwich Twin (now Clearview Cinemas), the Community (now non-profit) and County Cinema (cabinet store) in Fairfield, the Norwalk Theatre (now closed-last used as a nightclub) and the Norwalk 1 & 2 (now the 4-screen Garden Cinemas) in Norwalk. The Fine Arts in Brookfield was also a part of this group, as was the Colony 5 in Wallingford (retail space).

I passed by here the other day and the address is now 76 Post Road in the center of Westport. Behind the building you can tell it was a cinema.

The original Fine Arts Theatre was acquired by Nutmeg Circuit in 1952, according to an item about a planned renovation of the house that appeared in the May 25, 1964, issue of Boxoffice Magazine.

i worked at fine arts theaters in westport from 1969 till about 75…. those were the days! we all had lots of fun got to see many first run movies which today are classics.the only bad part was changing the marquee on a cold windy night.i still have some posters and stills i will never part with. i hope all my old buddies are doing fine although some i fear have passed …but if your reading this… hello to derek hylton, ernie groual, john hines, scotty, bob roscoe, ect ect ect…

the circuit was owned by bob smerling who owned many theaters in the tri-state area. i also understand the “ships lantern bar and restaurant down the street is gone…they used to slip me booze out the back door before i was 18… its a shame those were great days!!

The Fine Arts theaters were originally operated by Leonard Sampson and Robert Spodick, who were from the Bronx and came to CT after WWII to open first the Lincoln Theater and then the rest of what became the Nutmeg Theater chain. Theaters in Fairfield County included the five in Westport beginning with the Fine Arts I on Post Road downtown (then the split of that theater, the Fine Arts 3 on Jesup Green, the Post Cinema where Pompanusec Furniture is, and the Fine Arts 4 at athe corner of Imperial Ave) the Norwalk Theater and Cinema Norwalk (now the Garden Cinemas, then a single screen), and County Cinema on Kings Highway in Fairfield, Wilton Cinema (now TJMaxx). These theaters were sold by Sampson and Spodick to Robert Smerling on January 1,1970 as I recall. Sampson and Spodick continued to operate the Lincoln, Crown, and York Square in New Haven, and theaters in Cheshire, Groton, Norwich, Mystic, and Westerly RI. Both men were recognized as Pioneers in the Theater Industry by the National Association of Theater Owners.

This should clarify some of the information in the previous comments regarding the chain of ownership and theaters in the Nutmeg Circuit up until it passed from its original owners.