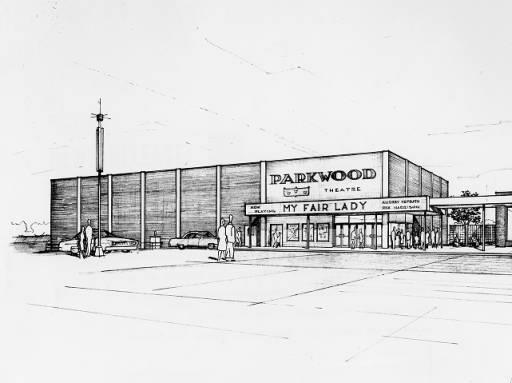 When the Leo Theatre closed its doors in the 1980’s, it was not owned by Leo Posel at that point. In 1980 Leo Postel sold the Leo Theatre to American Multi-Cinema Inc. (AMC Theatres), thus marking AMC’s entetry in the Philadelphia region, along with them buying the Bucks County Mall Colonial Theatre, The Premiere Theatre, and The Woodhaven Mall 4 Theatre.

Parkwood, when it finally closed, was owned by RAM Theatre, which also owned, at that point, The Wavery Theatre in Drexel Hill, PA

Today, the area where the Parkwood once was has shops and offices.

These stores, including Rite Aid, and offices were built right in the Parkwood Theatre building. I lived in Parkwood back in 1973-90 when this theatre was opened and when this conversion to stores and offices took place.

This theatre was originally privately owne & was dated prior to the failure of Liberty Bell Race Track. I managed this theatre in the mid 1960’s. This was prior to me joining Mert & Sam Shapiro & their Sameric (ERIC) Theatre Corporation.

In what style was the Parkwood Theatre designed and who were the architects? Also, when in the 1970’s was it twinned and when in 1985 did it close? Please share if you can, and thanks!

In the beginning,it was part of a partnership controlled by Messed. Abel,Levison and Koff who also operated the Lawrence park (Broomall) which later was operated by Sameric, and the Keswick (Glenside) which was managed by RAM after the death of Mel Koff in 1976,as well as the Theater 1812 in Center City. Lawrence Park is now a Barnes and Nobles, the Keswick a live concert venue and 1812 is now part of Boyd’s men’s wear store. 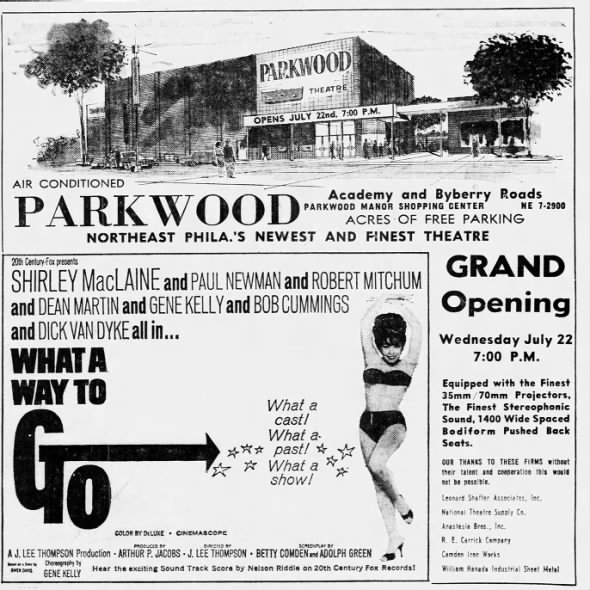 The Parkwood Theatre was announced late in 1963 in the 1962-built Parkwood Manor Shopping Center anchored by an A&P grocer. The 1,400 seat single-screen theatre had 70mm capability and a Colonial design for Robert Theatre Corp. It was a $450,000 suburban built by Leonard Shaffer Co. John T. Brugger was the architect of the theater.

The twin departed after 20 years at end of lease on November 29, 1984 with “American Dreamer” and “Indiana Jones and the Temple of Doom.” (The theatre missed on opportunity to close with its opening film - the appropriately-titled, “What a Way to Go.”) In 1986, the space was converted for other retail purposes by the Korman Co. in a $1 million overhaul.