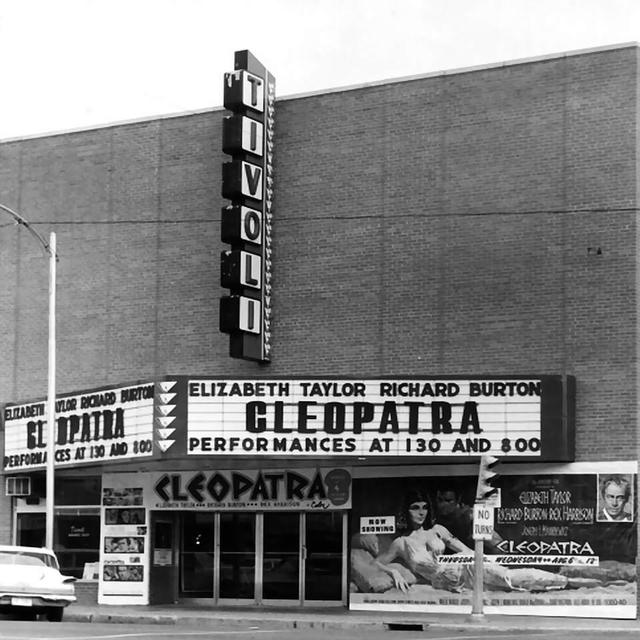 The front facade has been painted a leaf green with a large vertical down the middle with “Tivoli” in blocks on each side and rows of flashing bulbs on the back side. The V shaped marquee is used to announce upcoming shows.

This is what the Tivoli Theatre looks like today. Former Temple Theatre can be seen in distance.
View link

Ardmore trivia;
Actress Rue McClanahan grew up here, and Gene Autry’s “Worlds Wonder Horse” Champion (A dark sorrel with four white stockings and a medium-wide blaze) is buried beneath the sidewalk in front of the Tivoli Theatre in Ardmore.

… and, Champion’s hoof prints are enshrined in cement inside the forecourt of Hollywood’s Mann’s Chinese Theatre.

A Nice looking theatre, stopped by the other day. Such am amazing downtown area. Must have been amazing in it’s day.

The Tivoli Theatre was designed by architect Leonard H. Bailey. It was (as the Princess Theatre) on a list of theaters he had designed that was published in the October 25, 1930, issue of Exhibitors Herald-World.

The July 15, 1916, issue of The Moving Picture World had this item that must have been about the Princess/Tivoli Theatre:

“Helback & Cox, proprietors of the Theatorium and Majestic theaters of Ardmore, Okla., have secured the location for a new picture theater in that city to be erected at the corner of West Main and B streets. Plans now being prepared provide for a seating capacity of 1,200 persons. It is hoped to have the house ready for opening in October.”

So far I haven’t found any mention of the opening date of the Princess in any of the trade publications, but it must have opened in the autumn of 1916.

Excellent finds, Lost Memory. Now that I’ve seen Leonard Bailey’s drawing, I can’t say that the plain facade of the Tivoli is an improvement on his design for the Princess.

I notice that the opening day ad mentions the Theatorium but not the Majestic Theatre. I wonder if Helback & Cox closed the Majestic upon (or even before) opening the Princess? I haven’t seen any ads for the Majestic after 1916.

Rusty is correct, and as the Palace and the Princess were both being listed in The Daily Ardmoreite from 1917 through at least 1922, it is clear they were two different theaters. Whether the house that became the Tivoli ever used the name Princess at all I haven’t discovered, but it seems increasingly unlikely.

Neither have I been able to find an address for the Princess Theatre that opened in 1917. It’s possible that the Princess was at the address we have listed for the Palace (109 W.Main Street), seeing how the two houses have been conflated in other ways, but not certain by any means. An earlier Princess Theatre, probably a storefront nickelodeon, was in operation at Ardmore by late 1909. I don’t know its address, either.

Celebrated a transformation by Griffith Amusements to widescreen and presentation of CinemaScope films on October 23, 1954