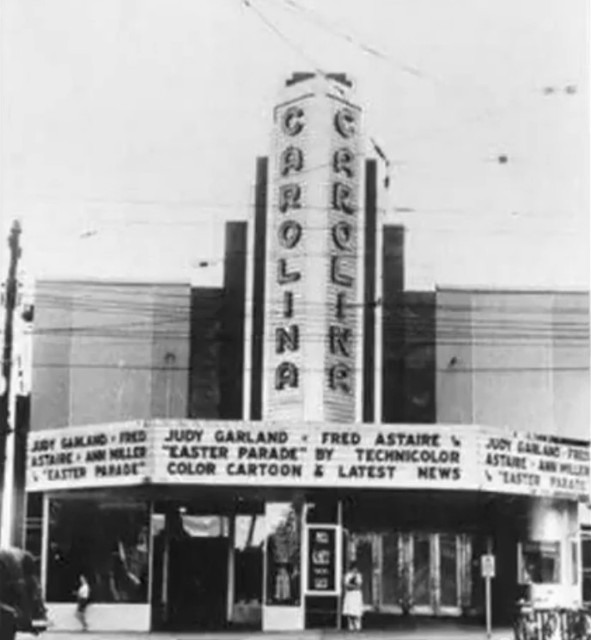 Just an update here: When I was in Greenville (1957-1970), the downtown theaters were the Carolina, the Fox, the Paris and the Center. I know the Carolina bore that name from its beginnings. The Fox Theater was once called the Rivoli, I believe. It may have had other names.

Greenville had The Plaza, as well, at Lewis Plaza. The Plaza showed MGM films and films by other studios. The Carolina was mostly 20th Century-Fox, Warner Brothers and Columbia Pictures films. The Fox showed Disney and Universal films. In the mid-1960s, The Mall Cinema opened behind the Wade Hampton Mall on Wade Hampton Boulevard (near Bob Jones). It was a single-screen house and showed films from Warner Brothers, United Artists and American-International (Dr. Goldfoot and the Bikini Bomb, anyone?). And on the outskirts of town, on 291 By-pass, a bi-plex opened next door to the Star Lanes, Greenville’s bowling alley. They called the theaters Astro I and Astro II. This theater got a lot of big-ticket films, such as “Funny Girl” and “Gone With the Wind” (in its 1960s re-release).

Back to the Carolina: I never knew the manager’s name, but I knew Billy Strange was an usher there for many years. A friend named Jim Whaley also ushered at the Carolina in the early 1960s for a few months. I ushered at the Mall Cinema in 1965 shortly after it opened its doors. Worked with some terrific people — Mr. Flow was the manager; Maria Sizemore worked the candy counter. Ronnie Reese and Lenny Flow were also ushers in those first months.

The Carolina’s projectionist throughout the 1960s was a great gentleman and a true aficionado of film. I regret not remembering his name.

The Carolina had the wide “rocking chair” seats by 1966 when we moved to Greenville. They were very comfortable, uphostered bottoms & backs. It appeared a good bit larger inside than the Fox.

Sounds to me that the Center may have been the former Roxy, south of the Paris but on same side of N. Main Street. I don’t believe it was a theater still by 1966.

My father told me once that the Carolina was located next to where the Hyatt Regency is now, the hyatt is at the corner of Beattie Place/College street and North Main street where the Ottaray Hotel was originally and the theatre was next to it going down towards East North Street.

There was also the Brandon Theater in the late 40s. It was located right by the railroad underpass in West Greenville.

May 13th, 1966 grand opening ad in the photo section as the New Carolina theatre.

I found a 1929 photo of the Majestic Theatre on Main Street, but do not see a page for it yet. Did it have another name at any point? And does anyone know the correct address? If so I will create the page. It has Majestic on the marquee, and Broadway on a blade sign.

Thank you. I have submitted a page and will add the photo once it is accepted.