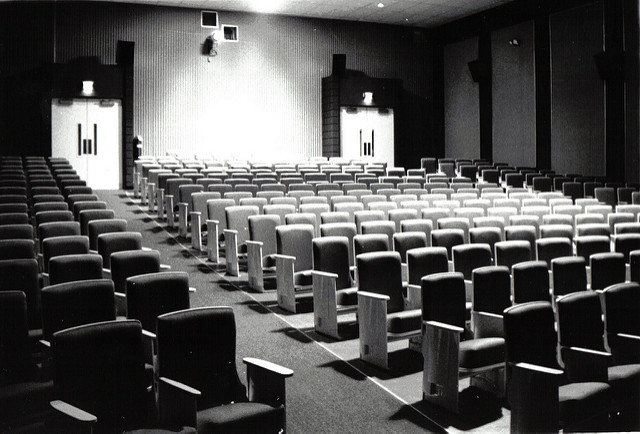 I was the projectionist for the Westgate Twin Cinema in 1979. Had two auditoriums of the same size, one red trim one blue trim. When I was there there, it was a single projector-platter in the left one and dual projectors in the right one Xenon arc Christie autowind platter. A concesssion stand in front center.

GMNash- I was told it was one of the worst robberies many had ever heard of in the industry. Yes, David Hopkins was the off-duty employee identified as stopping by the theatre that night and finding the films showing but no employees running the theatre. You are absolutely right about Mr. McKissick’s plane going down (October 25, 1990). My father worked for Mr. McKissick for a brief time in 1980 and thought the world of him; was quite distraught over the news. Your friend, if he managed the theatre in the late 80s would have worked for General Cinema no doubt since they didn’t sell the theatre to Litchfield until 1989.

PatriciaNC, then it was in 1989. Charlie was here in Nashville at the Courtyard 8 from 1988 until March of 1989. Litchfield moved him back to take the Westgate Cinemas that spring, and left me as manager here. I stopped by the theatre on my way back home from Hilton Head, probably in 1990 to see them, went to grab dinner with Charlie, his wife, and David.

I met Mr. McKissick once, he came to the grand opening here in Nashville. I remember Charlie telling me of the plane going down, and signaled, once again, the end of Litchfield Theatres. I believe Regal bought them in 1991. I don’t know if the resort, Litchfield By The Sea, still remains.

Oh, and I think I remember Charlie telling me a new theatre was built, or was going to be built at the mall…. don’t know any specifics, though, but the theatre I was in was in need of some TLC at the time.

The original Westgate Cinema (owned by Plitt Theatres) in Spartanburg was opened on W.O. Ezell Blvd. in the 70’s beside Paul M. Dorman High School. I think I saw JAWS there in the summer of 75 and Star Wars there in 77. I remember going to see the Bill Murray movie STRIPES there over 10 times in 81. haha Saw BLADE RUNNER there in 83. Clash of The Titans, Raiders of The Lost Ark, many others. Lots of great memories. I lived across the street from the theatre in Wadsworth Hills. Just a stroll across the street and I was at the movies. In 1984 they opened the other cinema behind the mall. I saw PURPLE RAIN there. The original cinema closed sometime in 86 I believe. It was later torn down and a Barnes and Noble bookstore is there now. Dorman High School was moved to Roebuck and the Dorman Centre with a Wal-Mart and loads of other stores replaced it.

As mentioned above, sometime in the early 90’s there were two people killed at the Westgate Mall Cinema. Both were shot execution style in a robbery by two former employees who were caught soon after and each were put to death for these crimes. In 98 the Westgate Cinema was torn down during mall expansion and relocated inside the mall on the second floor above the food court. A few years later, a 16 screen theatre, the Spartanburg 16 was opened a short distance away from the mall. I thought that would be the demise of the mall theatre, but thankfully it is still going. Over the years lots of theatres have come and gone in Spartanburg. It’s hard to believe that there were 5 different operating theatres (probably single or double screens) downtown back in the 50s. I saw An American Werewolf In London at Pinewood Cinema back in 1981. That was quite a treat for a 14 year old boy. I apologise for rambling…I’ll catch you folks later on down the trail…

Actually, it was those films' sequels that played at WestGate. The original “Jaws” played first-run at Hillcrest Twin, and the original run of “Star Wars” was at Royal Twin.

I am familiar with your extensive “Jaws” list, but where is your comparable “Star Wars” list? Obviously not the 30th anniversary one posted here and on in70mm.com

My guess is after reading some on this unit open as a twin, later was spit then feel GENERAL CINEMA left at one point another chain took it maybe spit it again the the building came down, feel another theater was built at this mall was in theaters over forty years just read the police report on the sad hold up here that by far the worst hold up at a theater I ever heard of pray never read of another as sad

There seems to be some confusion in this thread about the theaters. I thought I would help out. I was employed at one of the two theaters mentioned. Westgate Cinema and Westgate Twin were not the same theater. They actually had nothing to do with each other in terms of business.

Westgate Twin was originally an ABC theater but was purchased by Plitt. This is when I worked there, starting out tearing tickets and moving to projectionist. The theater was located on W.O. Ezell Blvd next to where Dorman High School used to be located. It was two screens and remained two screens until it was closed and demolished. There was a Red side and Blue side. It was one of the last theaters in Spartanburg that really big screens and curtains that moved on the side when the movie was in CinemaScope. The theater was sold by Plitt to a Canadian company called Cineplex Odeon. After that it was closed and demolished. A Barnes and Noble sits there now.

Westgate Cinema 6 AKA Westgate Mall theater was outside of the mall in the back parking lot about where Costco is now. At the time it was only 6 screens but is not I think 8 screens inside the mall, upstairs. The theater was originally owned by General Cinemas. I know this because they used this presentation bumper. Most people hated it. I always sort of liked it.

It was later purchased by Regal Theaters and used this bumper.

I have somewhere in my position the bumper from Plitt but its on 35MM film and could not find it on YouTube.

Anyway, Westgate Cinemas was the location of a horrible robbery and double murder. One victim was killed on site and the other (Asst.manager and friend of mine)was taken up to Inman and shot execution style. The two killers had been sitting in the theater watching “Dances With Wolves”. they left the movie robbed and killed the two people and in the long run, themselves. All for around $2000 bucks.