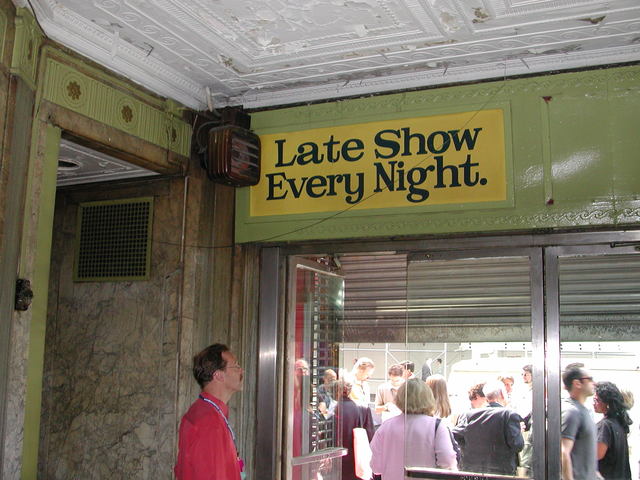 One of the last theatres in the Times Square area to not be demolished or saved, this Eugene DeRosa-designed former legitimate house opened on September 30, 1920, for the brothers Edgar & Arch Selwyn. The opening play was “The Mirage” written by Edgar Selwyn and starring Florence Reed, which ran for six months.

Despite having one of the more recognizable facades in the area, complete with a tall row of Neo-Classical style columns, the Times Square Theatre has little to no lobby. The auditorium is decorated in an Empire/Adam style, with seating provided for 512 in the orchestra level, and 529 in the single balcony level. There are four boxes, which seat a total of 16.

Several hit plays ran at the Times Square Theatre, including “Gentlemen Prefer Blonds” in 1926-1927, “The Front Page” in 1928, George Gershwin’s “Strike Up the Band” in 1930, and “Private Lives” brought the original London cast to Broadway in 1931, starring Noel Coward, Gertrude Lawrence and Laurence Olivier. The last play to be staged at the Times Square Theatre was Tallulah Bankhead in “Forsaking All Others” in the summer of 1933.

In 1934, the Time Square Theatre was converted into a movie theatre, with the stage being converted into a retail store, therefore virtually ending its live theatre career. It was operated for many years by the Brandt Theatres chain. Ending its run in the 1980’s as a discount movie theatre, the auditorium has since closed and over the years has sustained fire damage and the wear and tear of time.

It was announced in July of 2004 that the urban apparel retailer, Ecko Unlimited, would be converting the old Times Square Theatre into a four-story store, with architectural elements such as the proscenium arch, ceiling dome, and ornamental plasterwork saved. This never happened.

In early-2011, plans were proposed to renovate and reopen the theatre housing a Las Vegas style multimedia show named “Broadway 4D”. Opening was planned for June 2014, but the project was cancelled. On September 18, 2018 it was announced that the theatre would recieve a $100 million renovation to convert into retail use.

Remember the old Metropolitan Opera House where the scenery was actually stored outside the building on 39th Street?

robboehm- How well I remember the old Met Opera House and the scenery out on the sidewalk! But not on 39th Street; it was to the rear- on Seventh Ave?? There was a large scene door at stage-left with an old dark brown canvas curtain over it. During the day all through the opera season if you walked by you would see rolled-up backdrops on the sidewalk, plus lots of scenery “flats” stacked up against the wall near the door.They didn’t seem to have space to store these items inside So they had to remove one set of scenery before they could load the new set. Rob- do you know where the Stage Door for performers, musicians and stage hands was located? I guess it was on the side of the building, either on the north wall, or the south wall.

I remember seeing the scenery on, as you point out, Seventh Avenue, and walking past the entrance on Broadway when I became a theatre goer in the late 1950s and a Long Island commuter in the 1960s. The only time I was in the old Met was for a children’s matinee of Carmen with Irra Petina as part of a 7th grade trip. Before I retired I did, however, attend many performances at Lincoln Center.

As a boy, I thought of the Met Opera House as a very glamorous and beautiful theatre. When I went into it around 1952 I was shocked at how shabby it was inside. Near it, the old Empire Theatre was still open but I never went into it. We used to go to NY on weekends because a trip there (from Boston) was so inexpensive even a school kid could afford it.

There are so many theaters that, in retrospect, I wish I had gone into, no matter what was playing, because now I will never have the opportunity again.

Luckily, I was a steady habitué of all the 42nd St theaters, so at least I have those memories.

speaking of the old 42 St. theaters. Disney published a beautiful book on the Mew Amsterdam across the street following its reopening in 1997. while the book contains photos of the interior literally right before the renovation began it oddly contains no photos of the interior when it was still a functioning movie theater in the mid-late 80s.

Some people and/or historians tend the ignore or downplay the five-decade history of successful motion picture exhibition at the 42d Street theaters.

For example, even on this site the description of the New Amsterdam contains the misinformation that the New Amsterdam was a second run theater, when it is well documented that it showed first-run double features for most of its cinematic history.

So I’m not surprised that the Disney book glossed over or omitted the years between 1937 and its re-opening back as a legitimate theater.

The Times Square Theater, was a first run picture house, part of a chain of 10 to 12 theaters owned by Brandt Theaters. I remember going there in the sixties and seventies. I remember that the balcony was usually closed off.

Can’t speak for the 70’s but the programming of the Times Square theatre in the 60’s was revivals of action movies that were more than 3-4 years old. Not 1st run.

I remember the sixties and the seventies at the theater. It was managed by a handsome man, who dressed impeccably in silk suits and French cuff. He brought a lot of class to the theater.