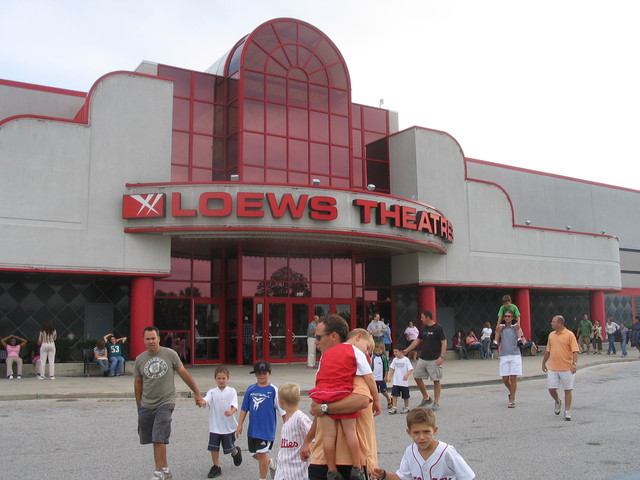 The Loews Cherry Hill 24 is a 93,000 square feet theatre located on Route 38 at the intersection of Haddonfield Road on a 20 acre site across the street from the Cherry Hill Mall, in the Philadelphia suburbs. Previously, the site held the Cherry Hill Inn, which had been built in the 1970’s.

As the largest multiplex in South Jersey when opened on December 18, 1998, the Loews Cherry Hill has 24 stadium seated auditoriums with a total of 4,400 seats. It has Dolby Digital sound, assistive listening devices, a large game room, indoor box office, large concession stand and online ticketing. The largest auditorium #23, had 487-seats and has since been converted into an IMAX (Laser) screen with fewer seats as they are now recliner seats. The 2nd largest auditorium , #24, had 382-seats but has since been converted into a Dolby auditorium, also with fewer seats since they are now recliner seats. The 3rd & 4th largest auditoriums are #22 with 300-seats and #14 with 295-seats.

All screens are large with fine sight lines and excellent surround sound.

Opened by Loews Cineplex, it is currently operated by AMC which purchased Loews in 2005.

One of the auditoriums is being renovated into a Dolby Cinema auditorium (auditorium 23?) as of September 2018. Will likely be open for Thanksgiving/Christmas movie season.

AMC Cherry Hill 24’s IMAX Theatre is being renovated to recliners, and possibly Laser IMAX. So is AMC New Brunswick 18.

Laser IMAX is confirmed to be in the works from this theater’s official website: https://www.amctheatres.com/movie-theatres/philadelphia/amc-cherry-hill-24

With regard to NJ, New Brunswick 18 has also been confirmed to receive IMAX with Laser and Garden State 16’s IMAX is undergoing renovations (Laser is not confirmed as of yet but it’s likely).

I’m skeptical that they’ll add recliners, however, since that would halve the number of available seats. For these kinds of upgrades, the new seating that they usually put in are called “AMC Signature Plush Rockers”

Best common height Dolby Cinema in the Philly metro. Slightly smaller than the common height screen at AMC Neshaminy but that theater has severe lighting issues (see my comment on the AMC Neshaminy page). Atmos was underwhelming at the two films I saw here yesterday (Sonic and Fantasy Island) but the Dolby promo sound was good so it could have been a film issue rather than a theater issue.

The business itself or just the building?

Please update, seating 3810 (IMAX Laser and Dolby reduced the total for the complex)