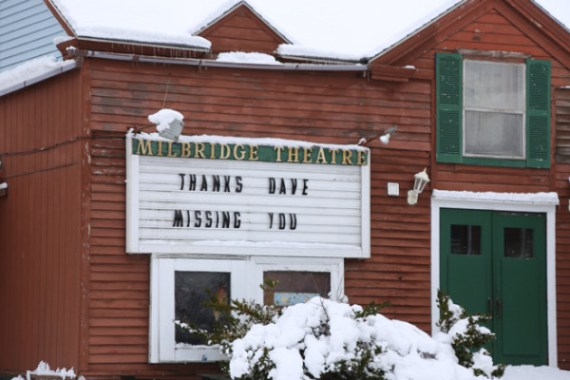 Opened as the Colonial Theatre in 1937. Later renamed Milbridge Theatre, it was closed in 2014. Renovation work began in September 2015.

According to a Maine tourism website, this is a 1930s movie theater with working player piano.

The Film Daily Yearbook, 1941 edition has a Colonial Theatre, Main Street listed that has 360 seats. Could this be the current Millbridge Theatre?

Other theatres listed in the town (no street address given) are the Opera House with 375 seats and the Wittan Theatre (no further details given).

The 1950 F.D.Y has the Colonial and Opera House still operating.

Is this still open? I am unable to find showtimes for this.

Yes! its still open, I grew up going to this theater and it hasn’t changed much from what I remember. The owner used to play the player piano before every film while people were sitting down and then make announcements about what was coming up in their programming.

I have seen photos taken in 1941 of both the Colonial Theatre and the Opera House in Milbridge. Both were on Main St. with no street number given. The Colonial looks suspiciously like the Milbridge Theatre, except there was no addition on the right front, which is there today. Even the chimney is in the same place, as well as the two little dormer peaks with one large peak in the center. And the Colonial was set well back from the street. The photo of the Colonial is on the MGM Theatre Report which is in the on-line archive of the Theatre Historical Society. The photo on it was taken April 25, 1941. The Report is Card # 407. The condition is Good. The report says it opened in 1936 and was playing MGM movies. There were 350 seats. The competing theater was the Opera House, also on Main St. 1940 population was 1,300.

I’ve got an answer to a couple of questions and some news. The Milbridge was called the Colonial when it opened in 1937 so Ken, you can update the seating capacity and the AKA. Unfortunately you can also update the status as closed.

According to an article in BDN Maine for August 5, 2015 it is unlikely that this summer’s only theater will reopen due to the death of the owner, Dave Parsons, who had owned the theater since 1978 (no indication if he made the name change). Also, according to his brother it probably would have not opened this year anyway because of the digital situation. To renovate and upgrade the theater would cost $150,000 which wouldn’t seem feasible.

I’ve uploaded a photo of the façade, with a tribute to the owner on the marquee, taken by Phil Duggan. You will note the emerald green door. It seems as though Dave’s favorite movie was the Wizard of Oz and to pay homage to it the door was painted emerald green and the ramp to the theater was painted yellow.

Some shots of and in the Milbridge can be seen in the 2005 indy movie The Puffy Chair.

Hello everyone! As you may know, Gateway:Milbridge is working to purchase, renovate, and reopen the Milbridge Theater. Fundraising and clean up efforts have already begun, and we are very pleased with the initial plans and response. To learn more about the project you can visit the Gateway:Milbridge website at www.GatewayMilbridge.com and to make a donation please visit https://www.gofundme.com/milbridgetheater Thank you for your interest in helping to preserve the Milbridge Theater!

Latest Update: Gateway Milbridge is in the process of raising funds to purchase the theater. It has about 260 seats – not 360 as noted above. Architectural concept drawings have been completed for a new theater on the existing site and can be viewed at www.milbridgetheatre.org and we are presently on track. The web site will give you more up to date information as to status, photos, drawings and more. I’m on the board of Gateway Milbridge and actively involved in the theater project. Everyone is excited and the new theater is being designed for multi-venue use – including live stage productions and concerts. The entire town is growing, the economy is coming alive, and Milbridge is now the new “hotspot” for business in Downeast Maine. Please contact us with any suggestions you may have or questions regarding the Milbridge Theatre. We are always happy to hear from interested parties. We are also happy to have you donate your time or money towards the project. Thank you!

We love this theater and want to see it re-open. Do you know if anyone has contacted the King Foundation: https://www.stkfoundation.org/ I bet they would donate to this cause.