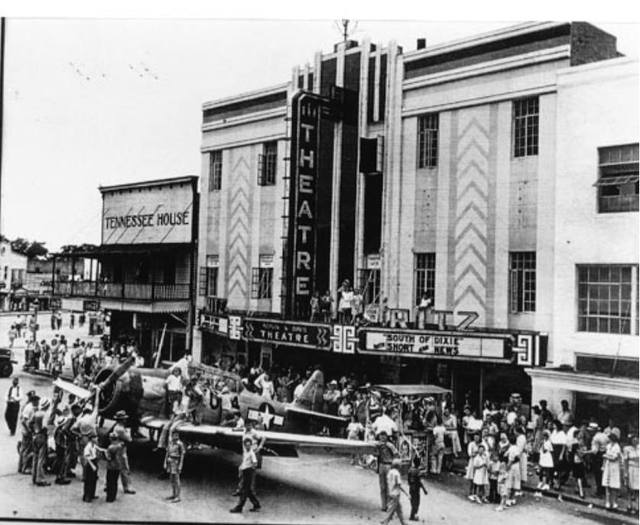 In the early-1950’s, the Ritz Theatre was renamed by the Martin family after themselves, and modernized, including a new marquee, a larger screen to accomodate Cinemascope and 3D features and a new (monochrome) repainting of the auditorium. The Martin Theatre showed its last film in 1978 and was then shuttered.

Vacant for years and falling into disrepair, the Martin Theatre served briefly in the early-1980’s as a shooting gallery (of all things). In 1987, the Panama City Downtown Improvement organization purchased the Martin Theatre and completely renovated the theater, and provided it with state of the art light and sound equipment.

Since a gala reopening in 1990, the Martin Theatre has added the Greenroom, a 1,500 square foot reception/meeting area on a former empty lot next to the theater. The Martin Theatre is now Panama City’s most splendid showplace for live theatre, concerts, classic movies and community functions.

From 1954 a picture postcard view of the Ritz Theatre in Panama City which was later renamed the Martin.

Here are some pictures I took in September 2010.

All nice pictures of what a movie theatre should look like.

My brother worked as “doorman” – “ticket-taker” at this theater back in the 50’s. They use to have Saturday morning matinees for about fifty cents. I think the entire school would attend these shows. You would see not only the movie, but newsreels, cartoon, a serial (Tarzan, Superman, Flash Gordon, etc), along with previews of upcoming events. Nothing could be more fun when they had stage shows and turned out the lights and let monsters loose in the audience. I’m interested if anyone has any pictures when they had the movie “Underwater” with Jane Russell. A display was set up and my brother furnished his large goldfish for the exhibit while the movie was playing. I also have fond memories of all the other movie theaters in town. Bud Davis Drive-in was located where K-mart is on 15th Street. What fun!

I live here in Panama City, I research History and I have joined a team that will be leading a paranormal investigation at the Martin Theater here in Panama City. I am VERY interested in any stories AT ALL of the events and people that frequented this establishment whether paranormal or not, that can shed some light on the rich history of this beautiful theater.

Photo added of Military Jeeps parading in front of the Ritz.