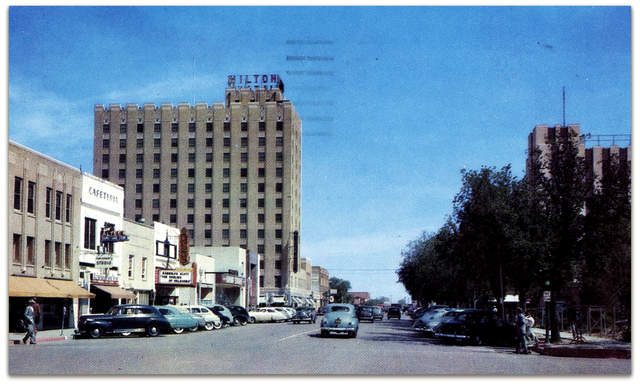 The Lyric Theatre was one of a cluster of theatres in this area of Lubbock. It was located on Texas Avenue, a block north of Broadway. It opened in 1917. It was damaged by a fire in August 1934. Rebuilt to the plans of architect S.B. Haynes, it reopened in 1935 and closed in 1964. It was operated by Lubbock Theatre, Inc.

The Lyric Theatre was listed as seating 450 people.

You may want to look at these 1939 photos by typing in word “lyric”, then hit search,
View link

This theater sat directly across from the Lubbock County courthouse. It is on an alley way that still exists. The building which sits there now very likely could be the same same structure with complete re-skinning. It’s a group of law offices now.

The opposite end of the alley would have found the back of the very large Lindsey Theater which has now been demolished.

My photo of the LINDSEY here.

The Lyric was THE movie showplace in the mid-1920s. The Texas Tech yearbook for 1926 says that when Tech played its first football game in the fall of 1925, the students were so excited after a game that they stormed the Lyric doing a snake dance in the aisles around the auditorium, just to celebrate a TIE game! I read someplace that the Lyric had the very first neon sign in town.