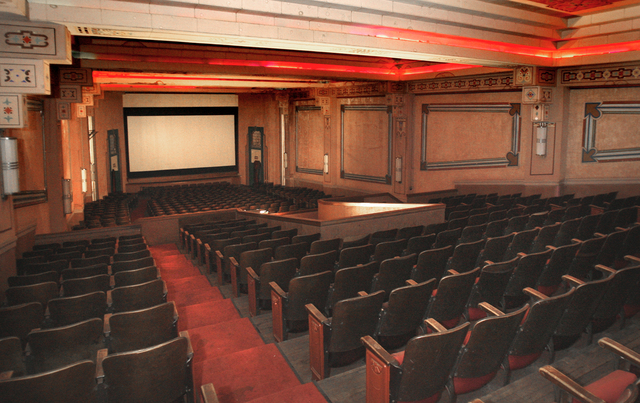 The Anthony Theater opened on November 23, 1936 with Joan Crawford & Clark Gable in “Love on the Run”. This Art Deco style theater was added to the National Register of Historic Places on April 18, 1991 as building #91000464.

In 2009, the Anthony Theater was closed and being renovated. It had reopened by August 2017 and was operating as a performing arts centre by 2020.

Wow! Considering how long this theater has been closed the interior shots seem to be pretty decent. You guys deserve a lot of credit for your foresight and dedication to bring this little gem back to life. Please keep Theatre Historical Society posted on your progress!

The attribution of the architect above is wrong. A.N. Fisher was the builder of the Anthony Theatre. The architect was S.S. Voigt, of Wichita.

The Anthony Theatre was partly owned by Charles Barron, operator of the Barron and Kansas theaters in Pratt, Kansas. His business partner at Anthony was Hazel Droz. Barron sold the Pratt theaters in 1943 and retired to California, but continued the partnership in Anthony until his death in 1952. He also held part ownership of the Star-Vue Drive-In at Anthony, opened by Mrs. Droz in 1950. After Mr. Barron’s death Mrs. Barron remained a partner in the Anthony operations for some time. Mrs. Droz sold the theater and the drive-in in 1970.

Also, a house called the Palace Theatre opened in Anthony on October 9, 1925, according to the notice in the October 17 issue of The Reel Journal. It was operated by L.W. Conner, an Oklahoma exhibitor. The Palace is mentioned a couple of times in 1926, and after that I can’t find anything about it. Does anybody know what became of it?

It’s unfortunate that the nomination doesn’t include any information about S.S. Voigt. There are only a few references to him on the Internet, leading to a photo of building he designed in 1927, and it makes me wonder if perhaps he designed the Barron Theatre as well. (Search Voigt on this page to reach a page about the 1927 Midian Shrine Temple.)

I also found that he designed a drug store at the northeast corner of Douglas and Hillside in Wichita which is still standing and can be seen in Google Street View (search 3200 E. Douglas Ave., Wichita.) All these buildings, including the Anthony Theatre, have the same attention to subtle detail that the Barron’s facade has, and the 1927 Shrine Temple even features the sort of Solomonic column details on the windows that the Barron sports.

Somehow the beginning of my comment above got lost in posting. Here it is:

The respective functions of Fisher and Voigt were noted on the nomination submitted to the NRHP. It includes an extensive description of the theater and its history. A .pdf of it is linked from this page for anybody who might want to read it.

The nomination form also says that Floyd and Hazel Droz entered the theater business when they purchased the Novelty Theatre in Anthony in 1934. I’ve been unable to find the Novelty (or Floyd Droz) mentioned in Boxoffice.

Below is a link to interior and exterior photos I took of the Anthony Theater. Anthony Theatre – a set on Flickr

Thanks to Keith Wondra for the excellent photos of this splendid survivor.

Since my previous comments about him, a bit more information about the architect has appeared on the Internet, most notably in a publication from the City of Wichita’s Historic Preservation Office that indludes a brief biography (PDF file here.)

Samuel Siegfried Voigt was born in Leipzig, Germany, in 1885. His family moved to Wichita in 1896. He studied architecture and engineering through the International Correspondence Schools, earning a degree in 1909. He became a draftsman in the office of Wichita architect Fred G. McCune, and established his own practice in 1913. Voigt appears to have specialized mostly in institutional projects, as by 1929 he had designed over 400 schools and 200 churches, completing projects in four states according to that year’s edition of Who’s Who in Wichita. He died in 1937, so the Anthony Theatre was a fairly late project.

I still haven’t been able to discover if Voigt designed any theaters other than the Anthony.

Our next project after fixing up the outside west wall is a new roof and repairing the facade. If you are interested in following our progress and are on facebook find us at Historic Anthony Theatre.

This theater should be changed to open. Showtimes are listed on Facebook.

Functions should include performing arts. No movies scheduled on Facebook page.