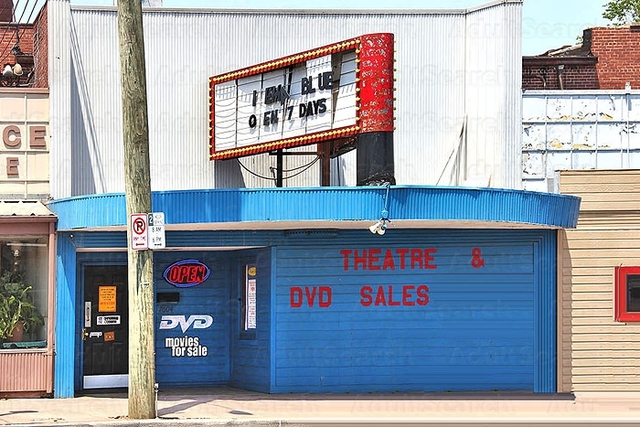 Located in the Wahouma district to the northeast of downtown. Opened in 1947 as the College Theatre. This theatre was still open showing adult movies as the Cinema Blue Theatre from December 13, 1985 until it was closed in 2014. The theatre stands vacant in January 2022.

The College was way out East on First Avenue North and a little out of my neighborhood. I saw occasional movies there in the 1960s and 70s, including Jane Fonda, Michel Piccoli, and Peter McEnery in “The Game is Over”—which resulted in a Playboy spread for Ms. Fonda (1966 or 67) as well as several entries in bad-movie directories. I remember the theater as a medium-sized neighborhood job, like the Normal (later Studio) theater near Memphis State University in Memphis, with a spacious lobby but no balcony and no striking features. The entrance on First Avenue North was very narrow, but the lobby opened up inside. I’m not sure where the “College” name came from. All the Bham-area colleges I’m familiar with are pretty far away.

Looks like it’s still going in 2009. The phone number is here:
http://tinyurl.com/mcdzfb

Howard College, now Samford, was located in East Lake from the 1890s to the early 1950s, hence the name College Theatre.

Actually this facility was built about 1947. The 1928 date would have been when the East Lake Theater was opened across the street. In 1947 Howard Collage was located around the corner and hence the name College Theater. When this facility was opened, the older, outdated East Lake Theater could not compete and was closed. It is now Estate Liquidators, LLC. After Howard College moved to Lakeshore Parkway in Homewood (Now Samford) the theater went through many changes, eventually becoming an adult theater in the early 70’s and it still operates as that today.

I remember seeing “The Producers” there in the 1960s when it was the College theater.

Vince Amaro, owner of the aforementioned Estate Liquidators LLC, has purchased the building and given the cinema operator 60 days to vacate. He proposed to restore the auditorium as a community performing arts center.

Per above article, status should be closed. Google Street View of May 2015 shows theatre is shut down.