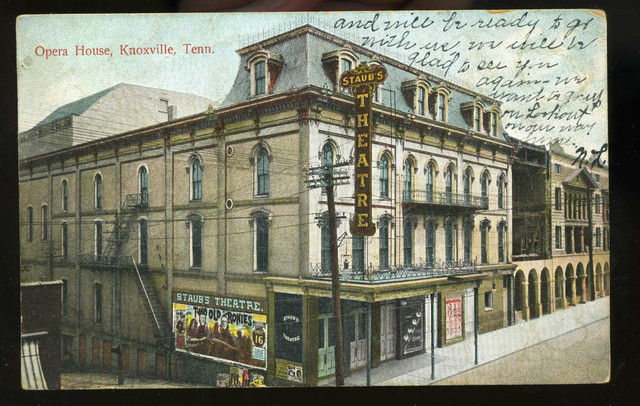 On September 26, 1872 Knoxville’s first opera house, Staub’s Theatre, opened on the corner of Gay Street and Cumberland Avenue. Under Peter Staub’s management, the theatre became the centerpiece of Knoxville’s cultural development, bringing prominent actors and theatrical companies to East Tennessee. It was rebuilt in 1901 to the plans of architect Frank Cox.

The Staub Theatre stood directly across from the later Bijou Theatre (q.v.). It featured lacy wrought iron exterior balconies above the side walk much like those seen in New Orleans. Old aerial photos imply an immense stage and stage house; full 1/3rd the size of the auditorium.

Staub’s Theatre ended its life showing movies and was torn down about 1960 to make way for a parking lot. In the mid-1980’s a bland office building was constructed on the site.

Yes, lost memory, you are correct, the Staubs was renamed the Lyric in the early 20â€™s. Loweâ€™s had taken over the operation of the Staubs in 1920 and remodeled the theatre as their flagship theatre in Knoxville and changed the name to Loweâ€™s Theatre. Loweâ€™s also installed a 4 manual 26 rank (?) Moller pipe organ at that time. Loweâ€™s gave up on the theatre after only two years and the name was changed to the Lyric, this is the name that most Knoxvillians remember it by. In the 1940â€™s the theatre was used mostly for wrestling matches. The stage was large enough, (some accounts say 50 feet deep) that ringside seating was on stage. The theatre was torn down with the organ still in the chambers in 1956 to make way for a department store that was never built.

As a side note, when the Tennessee Theatre opened in 1928, â€œWingsâ€ was playing at the Lyric.

A picture of the Lyric with audience can be found here:
View link
Lobby:
View link
Exterior:
View link

As Staub’s Theatre this house is listed under Knoxville in the 1897-98 edition of the Julius Cahn Official Theatrical Guide. It was managed by Fritz Staub and had 1,150 seats. There was gas illumination, and the theater was on the ground floor. The proscenium opening was 30 feet square, and the stage was 38 feet deep. There were 7 in the house orchestra. On the same page in the Guide there are ads for the Hotel Imperial in Knoxville and the Knoxville Transfer Company which handled theatrical scenary and baggage. Newspapers were the Tribune, Journal, and Sentinel, and hotels for show folk were the Flanders, Imperial, Palace, and the McMillon. Railroad was the Southern. The 1897 population of Knoxville was 45,000.

@ TNTIM: Oh, it kills me to see those! Such a beautiful venue to be demolished in favor of a glass-slab office!

The November 9, 1901, issue of the New York Dramatic Mirror reported that Staub’s Theatre in Knoxville had reopened on October 14 after having been rebuilt over the previous summer at a cost of $40,000. The architect for the project was Frank Cox.