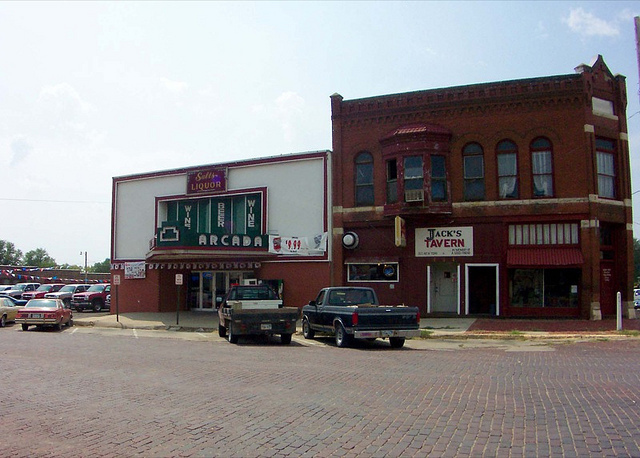 The Perkins Theater in Holton originally opened in 1907. In 1935-36, the theater was remodeled by the Boller Brothers and renamed the Arcada Theater. In the late-1940’s it was taken over by Commonwealth Amusement. Today, the former theater is used as a liquor store.

The theater building now houses a liquor store. The marquee is intact the store uses it for advertising.

The Boller Brothers re-modelled the theatre in 1935-6.

This theater was discussed in a 1953 documentary about how the city of Holton, Kansas is surviving since the Arcada was closed down a year or two before. Several business owners, including the grocery store owner who states his business has gone down because mothers would send their children to the Saturday matinee and shop at his store, then pick up the kids on their way out. Since the theater closed, they go elsewhere.

This theater was featured in a 1953 theater owners' documentary about the financial devastation wrought by the 20% federal tax, plus other encroachments on the box office, such as television.

In this case the theater had burned down and I don’t think it ever re-opened as a theater.

Tonight I saw the 1953 documentary on TCM about the financial difficulties of movie theatres in the late'40’s to early ‘50’s caused by a series of taxes. It was a treat to see the owners of various Holton, KS businesses talk about their town. Having lived most of my in small town Kansas and traveled through Holton many a time on motorcycle trips I enjoyed the short history lesson on Holton.