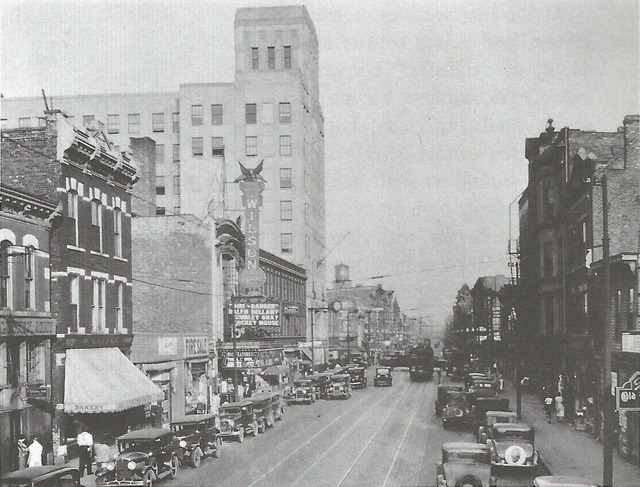 The Wilson Theatre was opened December 21 1918 for the Lubliner & Trinz chain. It sat 1,100 and was located in the West Town neighborhood on W. Madison Street near N. Western Avenue. It was renamed Four Star Theatre (or 4 Star) on January 11, 1937. By June 1970 it was operating an adult movie house name 4 Star Playhouse.

Almost the entire block the theatre once stood on was razed and is now a parking lot.

In the late 80’s I spent a lot of time photographing the remaining neighborhood theatres of Chicago. This was one of them, and it was an unfortunate story. EVERYTHING had been stripped from the building. Even the fire doors had been stolen. The retail and office block, and any theatre attraction signs were also gone. The lobby and auditorium were darkened shelters for the homeless. It looked like something from a war zone. There was an interesting old theatre, I believe called the Imperial, not far away. Seemed to be substantially intact. A picture I saw of the inside (being used as a storage facility) showed two balconies. I think it was taken down around the time the United Center was finished. Probably could have done something with that one, as the West Side has been on an upswing for the last number of years.

As of today,the site of this former theatre was being developed into condos.

In the book “CHICAGO- GROWTH OF A METROPOLIS” by Harold M. Mayer, there is a photo of Madison street near Western Ave. from 1934. You can see the vertical sign of the Wilson theatre(aka 4 Star). It’s on page 345. Also in the book: the vertical signs and marquees of the Paradise, Marbro, and Tivoli theatres from the 1920s on page 347.

To “Life’s too short”, yes the theatre on the other side of Madison and the other side of Western was the Imperial. I remember the deteriorating brickwork near the top, near the rear (SW corner) to be incredibly thick for being so high up on the wall.

I was first in this theatre in 1966 while it was still in “legitimate” movie operation; I was trying to buy the pipe organ at that time. The theatre was built with no stage, with the screen on an elaborate frame on the back wall. Later (I was told about 1930) the organ console was hacked apart and hauled out because the pit was being eliminated as part of a remodeling. False walls were built in front of the organ grilles (actually pipe facades) and a shallow stage was created. If you opened the inside exit doors and looked up as you went toward the outer exit doors, you could see all the original decoration of the front of the organ chamber and the intact pipe facades. All of the organ was on the left side, facing the stage. I did not get the organ, but that is another story. One of the projectionists was Tom Watson, who actually owned the projectors. He was on duty during the Chicago riots in 1967 (or was it 1969??). He heard people running through the vacant lot next door from his window in the projection booth. He decided to go downstairs and look out on Madison street after changing the reel (yes there were customers in the theatre) only to see both sides of Madison street in flames to the immediate East. He went back to the booth and when his relief man came in they decided to abandon their post. He put short carbons in, started the last reel, and left. The next day, his boss (still Lubliner & Trinz) said the manager had checked the theatre in the morning, expecting to see only ashes but saw the only damage was one cracked glass in a front door, and told Tom to report for work at noon as usual. He and the manager got there at the same time, went in, lit the marquee and prepared to open. In only a few minutes the police stormed the place and asked what in the hell they were doing. “Getting ready to open” they said “like hell” the police said and sood there while Tom and the manager shut down, locked up and left; they were closed for several weeks. In, I think, 1969 a guy named Cooper took over the operation (and the Lincoln & Dixie theatre in Chicago Heights too) and it became a “porno” house. Shortly after, he came in one day to find no power in the building. Investigating, he found all the copper bussbars and other wires had been stolen from the power room. The theatre never re-opened. About the same time, the Lincoln & Dixie in Chicago Heights suffered an arson fire on the stage and it never re-opened. Shortly after that, a friend of mine was looking for a pipe organ for his home, and I remembered the Four Star organ. Building ownership had passed to a Charles Rambert who owned the laundromat down the street. He had intended to turn the Four Star into a laundromat, but this never happened. In any case, my friend purchased the organ based on my description of several years before, but did not inspect it first. Armed with flashlights and a long extention cord a crew arrived to remove the organ. They found that when the copper from the power room was stolen, so were the chimes and all the metal organ pipes! Long story made short, the organ went down with the building. Oh, the regular organist in the ‘20’s was Merrill J. Isaacs. There was a radio station in the office tower next to the Four Star on the NW corner of Madison and Western and rumor had it that the Four Star organ was broadcast from there – rumor again – at least once by Jesse Crawford. The organ was an early-style straight Kimball, I think 7 ranks.

I remember trying to figure out why the building was built with what looked like an exit tunnel, open on one side leading from the front to the back of the building on the lobby end (west wall). There were other very odd features on that west wall which made no sense.

Oh, the roof trusses were on the OUTSIDE of the roof, like the Michigan theatre on 55th Street (also a Kimball) so there was no attic.

The 4 Star theatre was open at least through mid June 1970. Before it closed for good, it was advertised as the 4 STAR PLAYHOUSE. It was showing double feature “adults only” soft-core films. From the Chicago Sun Times on Friday, June 12, 1970: “LIKE IT IS” & “CALICO QUEEN”.